Home » Data and documentation » Issues paper » 3 Report on Adapted PPVT-III and 'Who Am I?'

3 Report on Adapted PPVT-III and 'Who Am I?'

The first wave of the Longitudinal Study of Australian Children (LSAC) used two tests with the four-year-old sample. The Adapted PPVT-III is a shortened version of the Peabody Picture Vocabulary Test, Third Edition (Dunn & Dunn, 1997), which is a test of receptive vocabulary used as a screening test of verbal ability. This adaptation is based on work done in the USA for the Head Start Impact Study, with a number of changes for use in Australia. 'Who Am I?' (de Lemos & Doig, 2000) assesses the cognitive processes that underlie the learning of early literacy and numeracy skills. One item was added to the standard 'Who Am I?' booklet for use in LSAC. Summary statistics for each test are shown in Table 9.

Note: For the adapted PPVT-III, it was assumed that children who were not required to answer 10 'basal' items had answered these items correctly. Reliability reported here is the person separation reliability (Wright & Masters, 1982).

The PPVT-III was adapted for use in LSAC by altering the administration procedures, reducing the number of items administered during testing. To determine which items to retain for the adapted version, 215 children aged from 41 to 66 months (mean = 54.7 months) were given the PPVT-III, with test administrators following standard procedures. After testing, a one-parameter (Rasch) item response model was fitted to the data, which consisted of correct and incorrect responses. The person separation reliability was 0.88. After determining the 'best' 40 items for use in a shortened version, the remaining items were then fit again to a one-parameter item response model; the person separation reliability decreased to 0.78.

The adapted PPVT-III was scaled using a two-stage process. In the first stage, only the core set of 20 items was used, as these items had been administered to all children. For these core items, Rasch estimates were determined for each item, providing an indication of their difficulty. In the second stage, all 40 items were fitted, using the item estimates for the core items as anchors. This gave item estimates for the basal and ceiling items relative to the core items. The final case estimates were then transformed to a scale with a mean of 64 and standard deviation of 8.

In Wave 1, 4,407 children were administered the adapted PPVT-III. Children ranged in age from 43 months to 79 months (mean = 57.3); 21% were aged 60 months or older. Twenty-one per cent of children were administered only the core set, 1% were given the core and basal sets, and 78% were given the core and ceiling sets, resulting in an average of 27.9 items. The test had a person separation reliability of 0.76.

Quality of the PPVT test

The statistics indicate that the core and ceiling items used for the adapted PPVT-III test fit the Rasch model well. This is shown in Figure 3, the item fit map. The infit mean square ranged from 0.86 to 1.17 for items 11-30 (the core set) and items 31-40 (the ceiling set). On each of the items in the basal set (items 1-10), the infit mean square was extremely low (0.49 or less) because only 30 children (1%) were administered these items; all other children were assumed to have correctly answered these items. The item map in Figure 3, which shows the item estimates (difficulties) mapped against the case estimates (children's ability levels), shows that the basal items were appropriate for children given that set but that the core and ceiling items were relatively easy for those who were given those sets.

Figure 3: Item fit map for all items on the Australian adaptation of the Peabody Picture Vocabulary Test (PPVT-III) calibrated with all cases anchored to core items 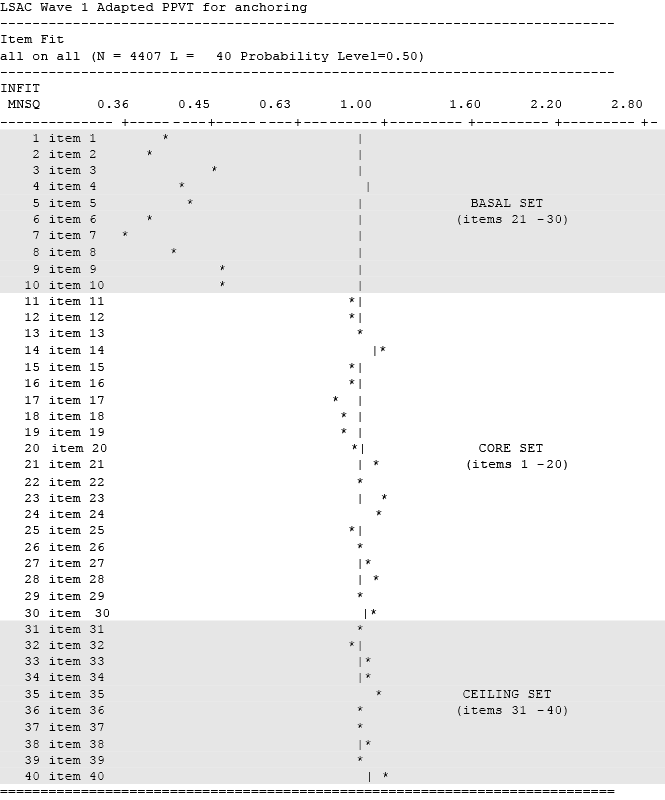 'Who Am I?' consisted of 11 pages on which children were to write their names, copy shapes and write words and numbers. Each response was assessed on a four-point scale relating to the skill required for the task. A score of zero was assigned if no attempt was made on the item. The data were fit using a partial credit item response model. The final case estimates were transformed to a scale with a mean of 64 and standard deviation of 8. Summary statistics are shown in Table 9.

Quality of the 'Who am I' test

The statistics indicate that the 'Who Am I?' data fit the rating scale model well, with most items falling within acceptable ranges, as shown in Figure 4. The most difficult item on the test was item 10, in which children were asked to write a sentence. Only nine children received four points for their response; more than one-half of children made no attempt on this item. This is also shown in the item fit map (Figure 4): item 10 (Sentence) has an infit mean square of 1.67, while all other items ranged from 0.77 to 1.14.

Figure 4: Item fit map for all items on the 'Who Am I?' test

Analysis of a partial credit model provides information on the thresholds required to move from any score to a higher score on each item. This information is provided in Figure 5, the item map, and is plotted against the distribution of case estimates. For all items, higher scores had higher logit values, indicating that higher scores were achieved by children who had higher ability estimates. The item map also indicates that the distribution of children (on the left) was only slightly above the distribution of the items (on the right), indicating that there was a good match between the difficulty of the items and the children's ability levels.

Correlation between the adapted PPVT-III and 'Who Am I?'

The two tests had a Pearson product-moment correlation of 0.309, based on 4,386 children who received scores on both tests. While significant at the .01 level, this is considered a low-to-moderate correlation. 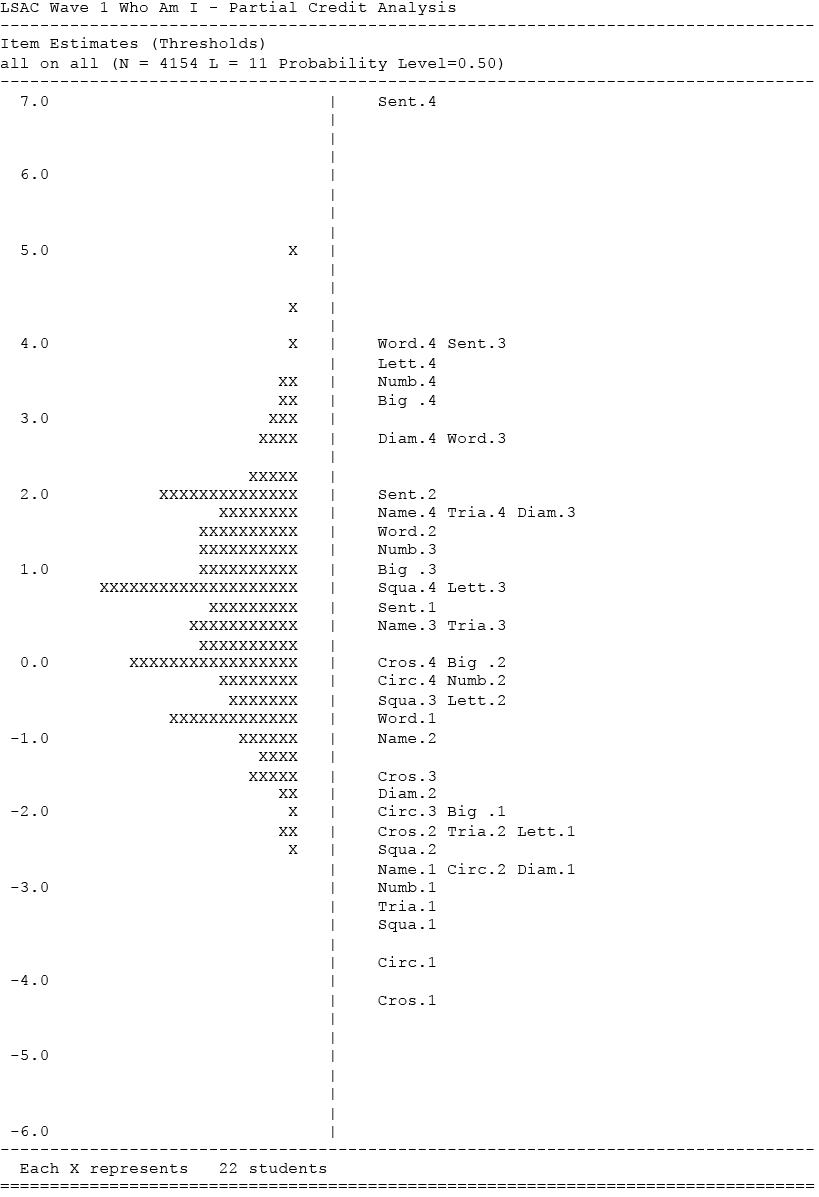 A sample comprising 421 children was drawn from schools in New South Wales, Victoria and Queensland. During July and August 2005, the children were administered the full version of the PPVT-III, Form A, using the standard procedures for administering the test to six year olds. These children ranged in age from five years seven months to seven years 11 months. Seventy-eight per cent of the children were six years old, and 18% were seven years old. All children were in the same classes at the schools involved in the data collection. Subsequent examination of the data showed that the children from out-of-range ages did not appear as significantly different cases.

Test items were examined using a one-parameter logistic IRT model with the software Quest. For items below the PPVT basal set that were not administered, all were marked as correct. Items with a low number of responses were eliminated from the IRT analysis. Overall, 132 items were used for analysis, as they covered a range that would allow 40 items to be selected and included the items administered in the four-year-old test.

After the link items were selected, the remaining items were selected using those with infit mean square and outfit mean square close to 1.00, good discrimination and an ability to provide a reasonable range of item difficulties (-2.50 to +2.50). Items were also selected according to their position in the original PPVT sets and their parts of speech: nouns, verbs and adjectives. The final 20 core items were then positioned into two sets of 10 items, with the first 10 items generally easier than the second 10 items but with an overlap of item estimates. Similar analyses were done to select the 10 basal and 10 ceiling items.

Once the 40 items were selected, a new IRT analysis was conducted using only those items. Case and item estimates showed that the model fit the data well. 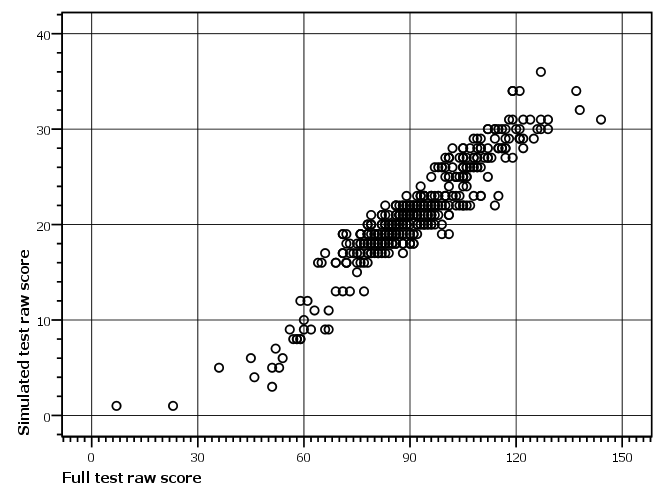 This chapter is largely based on the work of Australian Council for Educational Research.