In the leave-behind questionnaires for both parents at Wave 1 and Wave 2, the parents were asked to report their height and weight so their body mass index (BMI) could be calculated. In cleaning Wave 2 data, it was discovered that there was a large number of discrepancies between the values reported by the same people at Wave 1 and at Wave 2. In fact, only 50% of respondents reported a value that was within 1% of their Wave 1 value.

Further investigation failed to find any explanation other than respondent error for the vast majority of these cases. In order that data analysts could assume that any observed changes in BMI were due to changes in reports of weight rather than height, it was decided to impute the value of height to be the average of the two reported values.

At Wave 3, the question on the Parent 1's height was asked of all new Parent 1's and those that had not returned a self-complete form at Wave 2, plus a handful of cases where Parent 1 had swapped places with Parent 2. However, for Parent 2, the height data was still collected by self-complete form, so sequencing cases around the question was not an option. Hence, for many,3 there are now three points of data collection.

When the study child's height is measured as part of the interview process, a third measurement is taken if the first two disagree by more than 0.5 cm. If this is the case, the estimate of the child's height is considered to be the average of the two that correspond the most closely. This method of estimation means that the least reliable estimate has no effect on the result. It is suggested that in cases with three data points for a parent's height, the 'clean' result provided on the data file could similarly be the average of the closest two responses. As is done currently, the values of parental height for each wave prior to this cleaning will remain on the data file if analysts wish to use their own approach.

It was decided on inspection of Figure 7 that any case with more than a 10 cm discrepancy between the two closest values should be considered unreliable and therefore should be set to missing. This would affect 4% of Wave 3 parents with two data points and less than 0.1% of cases with three data points.

Figure 7: Centimetre discrepancy in two closest data points for those with three vs two data points on parental height for Wave 3 respondents 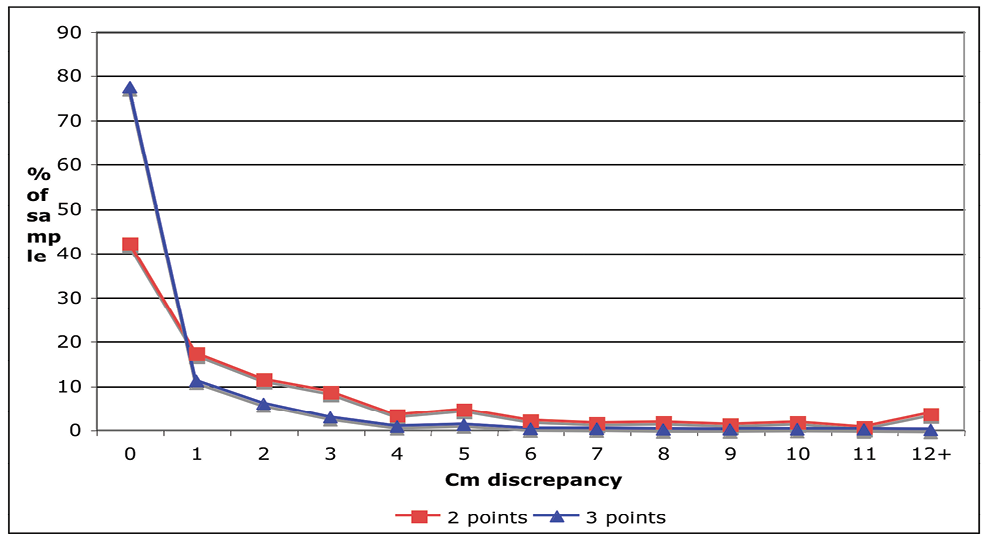