A Data issues paper for Waves 1 to 7 is available and details issues that have been identified over the course of the study. Data users should be aware of these issues when using LSAC data for their analysis. Other important issues are addressed below.

The LSAC study design, based on a complex probability sample, is specifically designed to produce valid estimates at the population level. Unlike clinically based or convenience samples, the LSAC sample is population based by design. By properly accounting for the survey design when analysing the data, it is possible not only to make inferences about the children and families participating in the study but to make valid inferences about the entire population of children in the relevant age groups.

The LSAC sampling strategy has three important elements that distinguish it from a simple random sample (SRS):

It is the responsibility of data users to determine when and how each of these needs to be accounted for when developing their analyses.

Stratification, by state and part of state, was employed to ensure that all geographic areas within Australia are represented in the sample in proportion to their population. This produces a more even distribution of the sample across geographic areas than could be expected from a simple random sample.

The use of stratification can be expected to reduce standard errors compared with a simple random sample with no control over the geographic spread of the sample. As such, when trying to extrapolate to the population, the stratification should be incorporated in the analysis of results from the survey in order to correctly calculate standard errors and confidence intervals.

The use of clustering in the sample design has important consequences for the analysis of data from the study. Clustering is useful in reducing the field costs associated with the survey enumeration. Clustering also has the added benefit of making possible the analysis of community-level effects, by ensuring that a sufficient sample is selected from each postcode included in the survey.

However, the use of clustering violates the standard assumption of independence of the observations that is fundamental to many statistical routines in major statistical packages. When children or carers have more similar characteristics within a given postcode than children or carers selected purely at random, the responses within postcodes will be correlated. This correlation will lead to an increase in the standard errors and size of the confidence intervals. The extent of this increase is measured by the design effect, which is the ratio of the variance of an estimate from the survey to the variance that would have been achieved by a simple random sample of the same size.

Failure to account for clustering in the analysis can lead to under-estimating the size of standard errors and confidence intervals. In some circumstances, this can result in misleading conclusions of statistical significance.

The Wave 1 weights provided in the LSAC data files take into account both the probability of selecting each child in the study and an adjustment for non-response. An analysis of possible differences in the characteristics of respondents and non-respondents was undertaken and identified two factors associated with the probability of participating in the survey - whether the mother speaks a language other than English at home, and whether the mother has completed Year 12. Both of these factors were incorporated into the Wave 1 survey weighting so that, to the best extent possible, the use of the sample weights offset the bias that may be introduced into the data due to differential non-response patterns.

At each subsequent wave of data collection, weights have been adjusted to account for the differential probability of response as estimated by regression. The weights are then calibrated back to the stratum benchmarks and a small number of cases have their weights top or bottom coded to prevent any case having too great or small an effect on the data.

Three types of weight are included in the LSAC datasets:

Data files for Wave 1 and Wave 2 each have one population weight and one sample weight. Given that there are no cases that responded to Wave 2 and didn't respond to Wave 1, these weights can be used for both longitudinal and cross-sectional analyses.

At Wave 3, two sample weights and two population weights are necessary as this is the first time that respondents could return to the study after missing a wave. The first of these weights the full Wave 3 sample and should be used for cross-sectional analyses. The second weights the sample that has responded to all waves, and should be used for longitudinal analyses.

A complete list of LSAC weighting variables is given in Tables 15 (B cohort) and 16 (K cohort).

An overview of population survey methods is given by Levy and Lemeshow (1999). They discuss the use of stratification, weighting and clustering in survey design and the impact it has on the analysis of sample survey data.

For a thorough discussion of the mathematical techniques used to analyse data from complex surveys, see Chambers and Skinner (2003).

There is now a range of software available from a number of vendors that supports the analysis of data from complex survey designs incorporating stratification, clustering and weighting. These include SAS (using the SURVEYMEANS and SURVEYREG procedures), STATA (using the svy commands), and SPSS (through the SPSS Complex Samples add-on module), as well as software packages specifically designed for the analysis of sample survey data such as WesVar and SUDAAN.

Use of the appropriate analytic techniques from one or more of these packages is recommended for researchers analysing the LSAC data. Results that properly account for the sample design features will have the greatest external validity and should be appropriate for drawing inferences about the total population of children from which the sample was taken.

The following shows a template for using the SURVEYREG and SURVEYMEANS procedures in SAS.

stratum: is a variable you can calculate for lsac0 using the formula:

pcodes: is the postcode of selection (already on the data file)

weights: is the sample weight (preferred to the population weight for this analysis)

<stratumfile> is a file that contains the number of Primary Sampling Units (in this case postcode clusters) in each stratum. It is included on the data CD or can be set up using the following code.

The child is the unit of selection in LSAC and estimates produced from this survey are of children, not of parents or families. It is important that this point is understood when producing population estimates from this survey.

Using the estimates to count families/parents will produce an over-count of the number of families/parents, due to the multiple (or over) counting of children from multiple births. Although this will not make a huge difference to the actual numbers, it may be important in the interpretation of the information and in comparing data from other sources.

Although it is possible to produce 'family' weights, it is not considered a worthwhile use of resources given the small number of analyses this could possibly meaningfully affect.

Different ages of children should be accounted for in any analyses focused on age-dependent measures such as cognitive and motor development. Figures 7 and 8 show the age distribution of the two cohorts at each wave. The figures show the age of the child as a base figure (i.e. 0, 2, 4, 6, 8, 10, 12, 14 and 16 years) plus a number of months. For example, a B cohort child aged three years and one month at time of interview in wave 2 is shown against '13' on the x-axis (see the red line).

Figure 7: Age distribution of B cohort sample at each wave 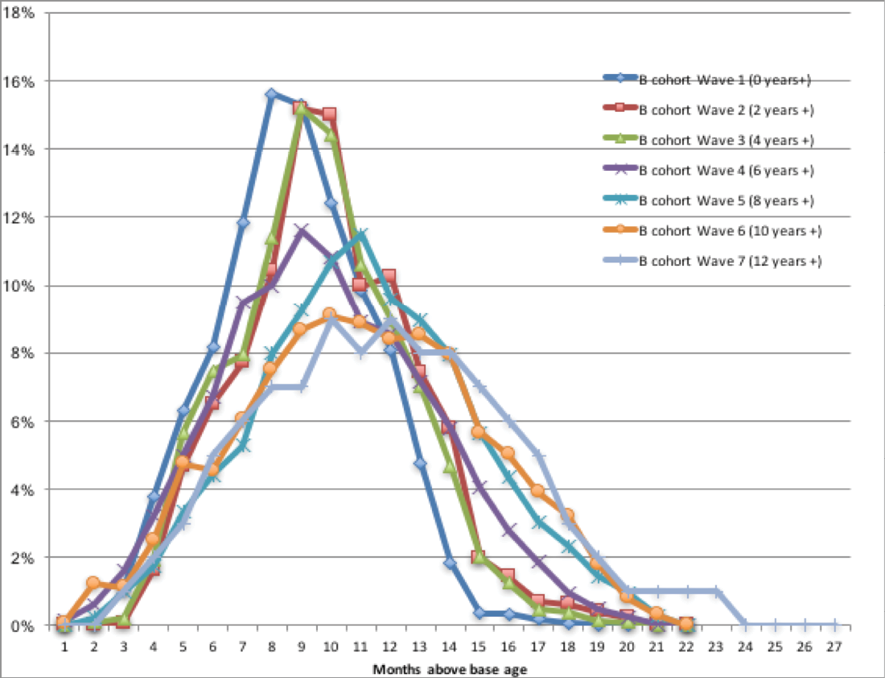 Figure 8: Age distribution of K cohort sample at each wave 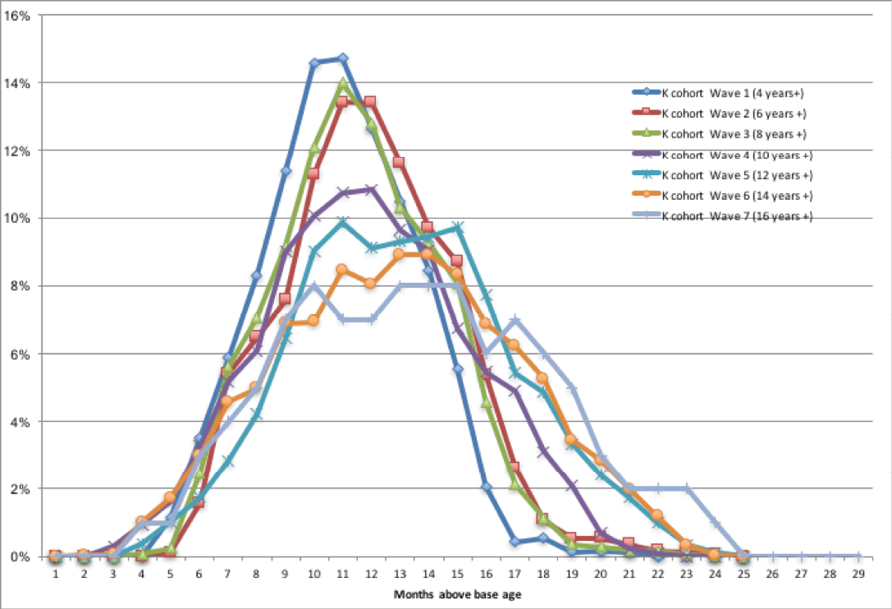 Effort is made to ensure that the time between interviews is close to two years; however, in some cases this is not possible. Figures 9 and 10 show the distribution of the intervals between waves.

Figure 9: Distribution of time between interviews, B cohort, Waves 1-7 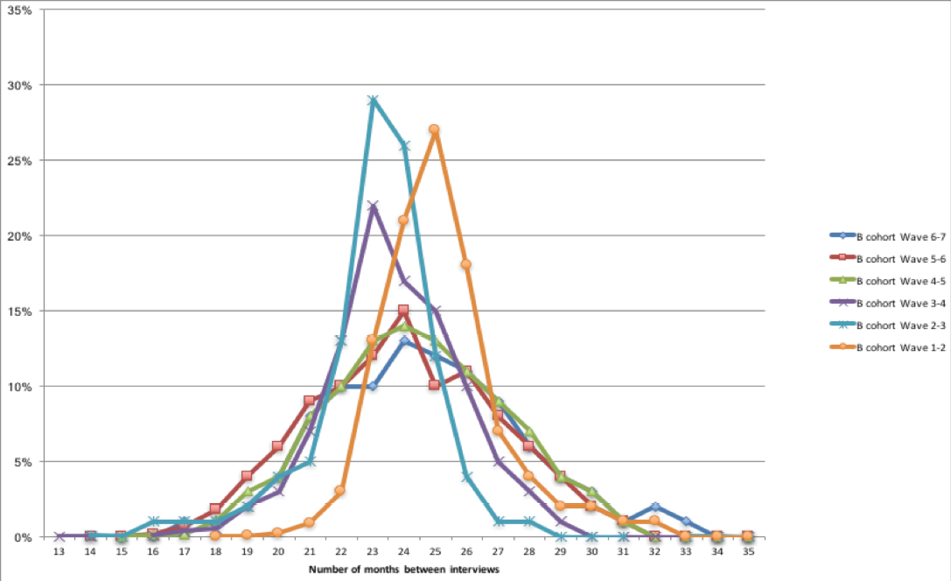 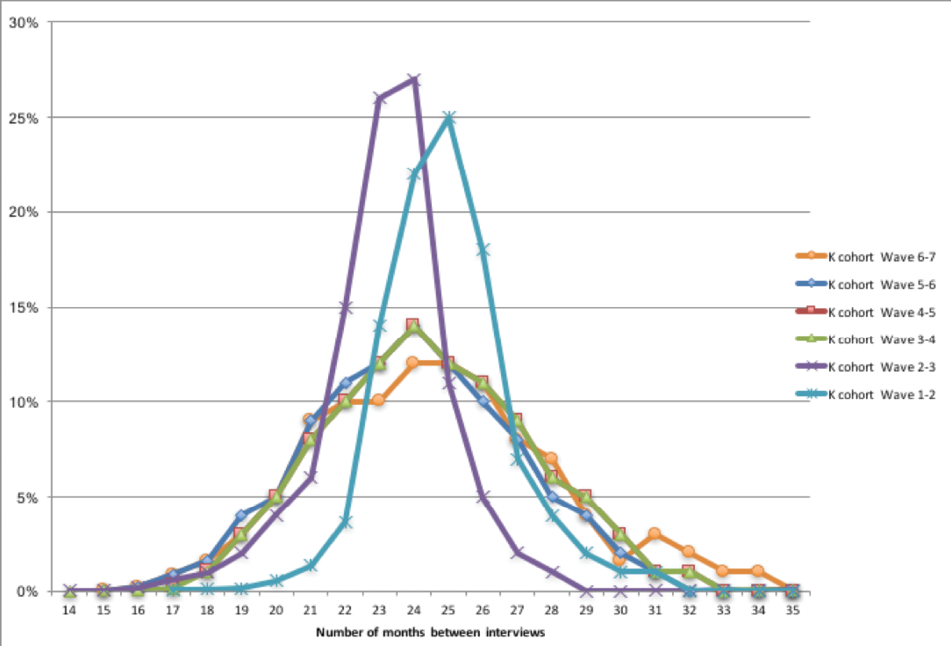 The implications of this are that even though the two cohorts have been weighted using similar variables, it does not mean that the variables that they have been weighted on are not responsible for the differences observed between the two. For example, because the two cohorts have had non-response due to maternal education adjusted for, it does not mean they will have equal proportions of mothers who had completed Year 12 when the weights are applied. Therefore, different levels of maternal education could explain differences observed between the two samples in the educational attainment of children.

Figure 11: Cohort benchmarks by state, part of state and gender 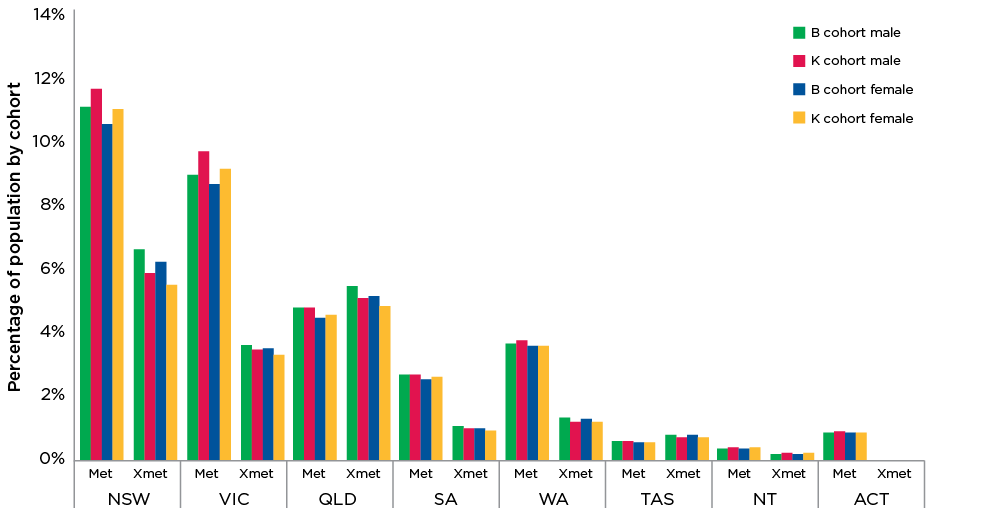 Figure 12: Proportion of mothers who completed Year 12, cohort benchmarks by state and part of state 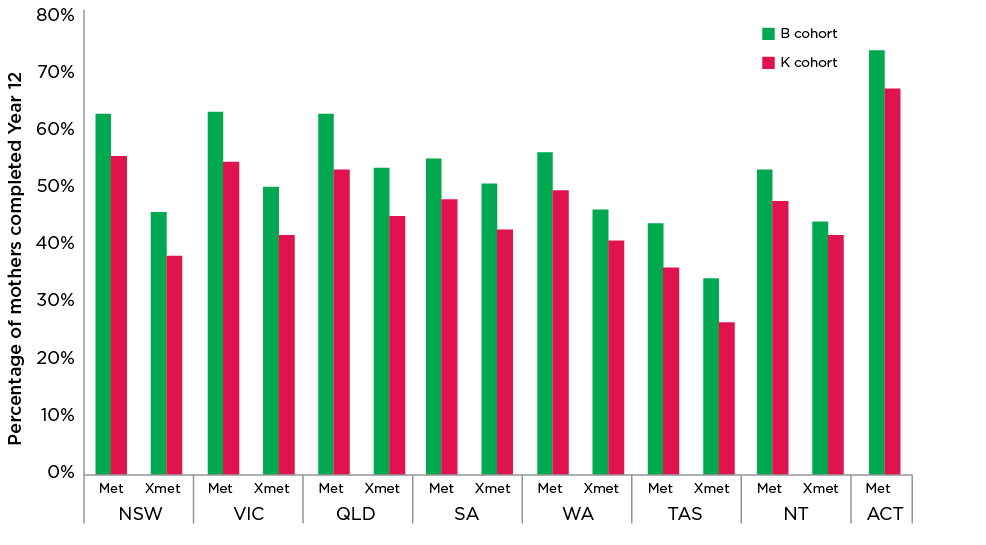 Figure 13: Proportion of mothers who speak a language other than English at home, cohort benchmarks by state and part of state 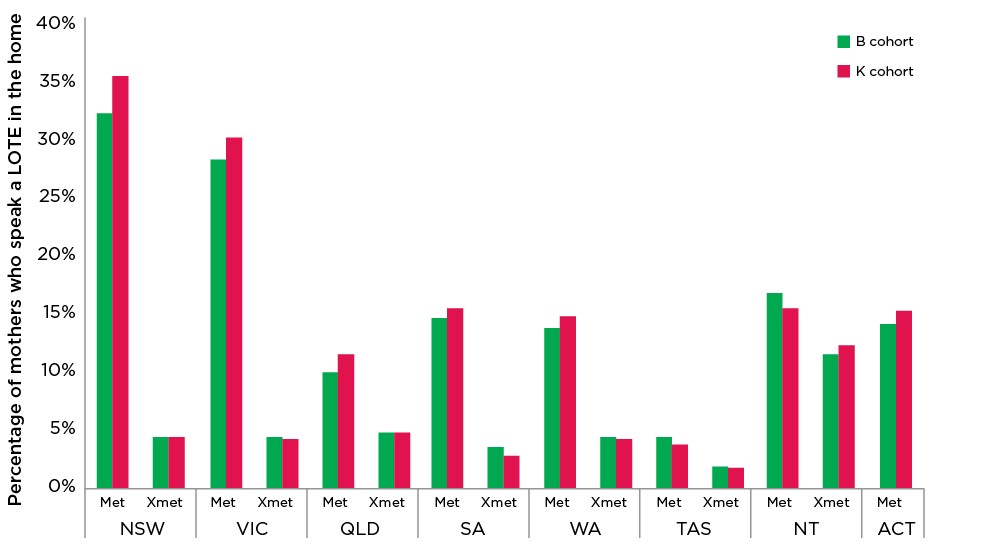 For most characteristics, the Wave 1 sample is only marginally different to the ABS data. The largest difference is in the educational status of the parents. Children with mothers who have completed Year 12 are over-represented in the sample, with proportions 10% higher than in the 2001 Census.

Other differences in the Wave 1 sample include:

Table 18 shows the number of children in the Wave 1 sample with selected characteristics, and gives the Waves 2-7 response rates for children with these characteristics. As can be seen in the table, the greatest sample loss has been from Indigenous families and families where P1 speaks a language other than English at home.