Home » About the Study » Growing Up around the world: Overseas studies

Growing Up around the world: Overseas studies

Growing Up in Australia has been such a massive success that it has inspired other “Growing Up” studies.

Growing Up in New Zealand

Launched in 2010, the children in Growing Up in New Zealand completed Wave 4 in 2016, when they were between 4 and 5 years old.

Growing Up in Scotland

Growing Up in Ireland

Check out some comparisons between the children in the "Child" cohorts of Australia and Ireland at around age 13 years.

Smoking: Have you ever tried smoking?

Drinking: Have you ever tried alcohol? 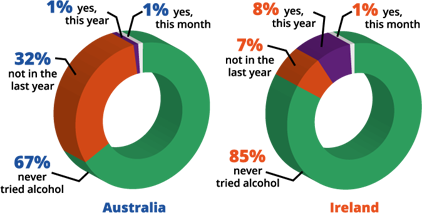 Update your details so we can keep in touch!

Want more information about the study and your privacy?