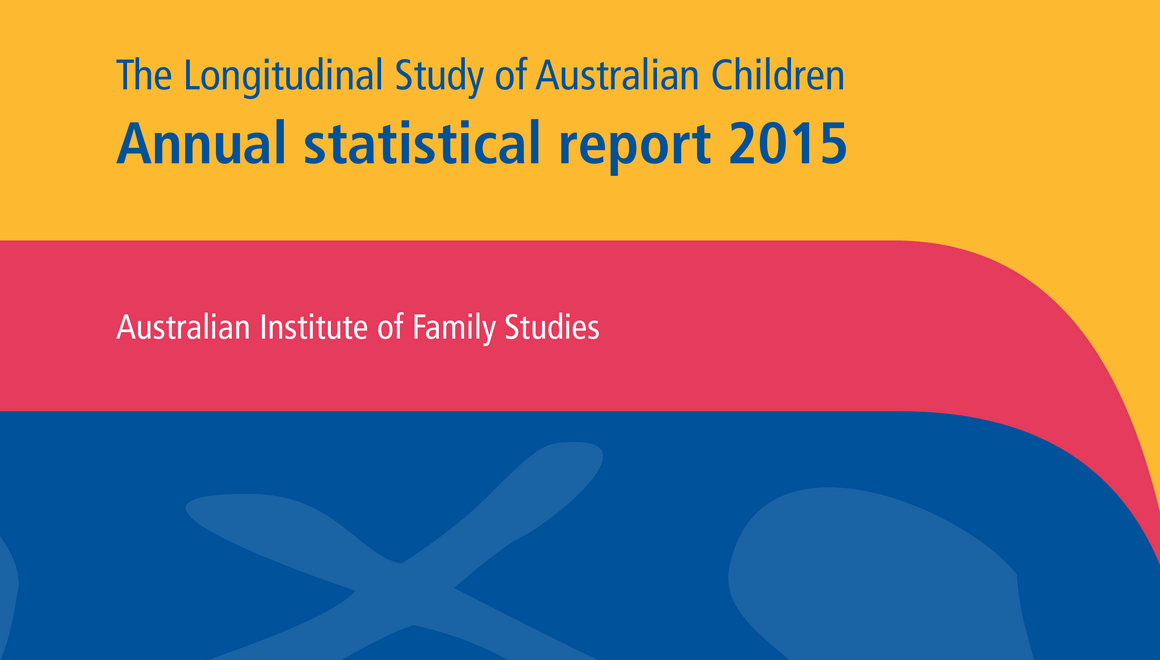 Growing Up in Australia: The Longitudinal Study of Australian Children (LSAC) is Australia's first nationally representative longitudinal study of child development. The purpose of the study is to provide data that enable a comprehensive understanding of development and life-course trajectories within Australia's current social, economic and cultural environment. The longitudinal nature of the study enables researchers to examine the dynamics of change through the life course as children develop, and to go beyond the static pictures provided by cross-sectional statistics. The study thereby gives policy-makers and researchers access to quality data about children's development in the contemporary Australian environment.

The study was initiated and is funded by the Australian Government Department of Social Services, and is conducted in partnership with the Australian Institute of Family Studies (AIFS) and the Australian Bureau of Statistics (ABS). A consortium of leading researchers and experts from universities and research agencies provide advice to the study.

This is the sixth volume in the LSAC Annual Statistical Report series, which uses data from the first five waves of the study. The purpose of these reports is to provide a snapshot of some of the data from the study and to address policy-relevant questions about aspects of Australian children's lives and development. The report makes use of the longitudinal nature of LSAC data to describe the dynamics of change as children develop, and how their families and lives change as they grow older.

The first section of this introductory chapter provides a brief overview of LSAC, the second describes the analytical approaches used throughout the main chapters of the report, and the third section introduces the subpopulation groups that are used for comparisons in some chapters. The chapter ends with summary tables comprising a glossary of LSAC terms, statistical indicators, and the scales and measures used throughout the report.

The LSAC study has an accelerated cross-sequential design, with two cohorts of children of differing ages at the start of the study. One of the advantages of this type of design is that it provides data on later developmental pathways and outcomes before the younger cohort of the two matures. From Wave 3 there is data on children of the same age from both cohorts at different time points.

The first wave of data collection took place in 2004, with subsequent main waves every two years. In 2005 (Wave 1.5), 2007 (Wave 2.5) and 2009 (Wave 3.5), parents were also asked to complete a between-waves mail survey. In 2011 (Wave 4.5), the between-wave data collection changed from a paper-based questionnaire to an Internet-based form for respondents to report changes in contact details to aid tracking. Table 1.1 summarises the ages and sample sizes for the two cohorts across the first five main waves of the study.

Notes: This table presents the numbers of children who responded at each wave.

The use of multiple respondents in LSAC provides a rich picture of children's lives and development in various contexts. Across the first five waves of the study, data were collected from:

In earlier waves of the study, the primary respondent was the child's Parent 1. In the majority of cases, this was the child's biological mother, but in a small number of families this was someone else who knew the most about the child. Since Wave 2, the K cohort children have answered age-appropriate interview questions, and from Wave 4 they have also answered a series of self-complete questions. The B cohort children answered a short set of interview questions in Wave 4 for the first time. As children grow older, they are progressively becoming the primary respondents of the study.

The interviews and questionnaires include validated scales appropriate to the children's ages (see section 1.4 for a list of some of the scales used in this report).

The sampling unit for LSAC is the study child. The sampling frame for the study was the Medicare Australia (formerly Health Insurance Commission) enrolments database, which is the most comprehensive database of Australia's population, particularly of young children. In 2004, approximately 18,800 children (aged 0-1 or 4-5 years) were sampled from this database, using a two-stage clustered design. In the first stage, 311 postcodes were randomly selected (very remote postcodes were excluded due to the high cost of collecting data from these areas). In the second stage, children were randomly selected within each postcode, with the two cohorts being sampled from the same postcodes. A process of stratification was used to ensure that the numbers of children selected were roughly proportionate to the total numbers of children within each state/territory, and within the capital city statistical districts and the rest of each state. The method of postcode selection took into account the number of children in the postcode; hence, all the potential participants in the study Australia-wide had an approximately equal chance of selection (about one in 25).3

This resulted in a nationally representative sample of 5,107 0-1 year olds and 4,983 4-5 year olds who were Australian citizens or permanent residents. Table 1.2 presents the response rates for each of the five main waves.

1.2 Analyses presented in this report

This report includes data from the first five main waves of the study, though given the breadth and depth of topics included in the study, chapters in this report do not necessarily use data from all five waves and/or both cohorts.

Each chapter addresses a series of policy-relevant questions using descriptive statistical analyses. In answering these questions, chapters generally take one or more of the following approaches:

Sample weights (for the study children) have been produced for the study dataset in order to reduce the effect of bias in sample selection and participant non-response (Cusack & Defina, 2014; Daraganova & Sipthorp, 2011; Misson & Sipthorp, 2007; Sipthorp & Misson, 2009; Soloff, Lawrence, & Johnstone, 2005; Soloff, Lawrence, Misson, & Johnstone, 2006). When these weights are used in the analysis, greater weight is given to population groups that are under-represented in the sample, and less weight to groups that are over-represented in the sample. Weighting therefore ensures that the study sample more accurately represents the sampled population.

These sample weights have been used in analyses presented throughout this report. Cross-sectional or longitudinal weights have been used when examining data from more than one wave. Analyses have also been conducted using Stata® svy (survey) commands, which take into account the clusters and strata used in the study design when producing measures of the reliability of estimates.

Key points to be noted

Parent 1 for each study child was defined by the family at Wave 1. At subsequent waves, the preference, where possible, has been to retain the same person as Parent 1 to maintain the longitudinal consistency of the data. However, if Parent 1 no longer resides with the child or is temporarily away, Parent 2 of the previous wave becomes Parent 1. If both Parent 1 and Parent 2 do not reside with the child or are temporarily away, then a new Parent 1 (the best person to ask about the child's health, development and care) is assigned. Thus, Parent 1 and Parent 2 are sometimes not the same person in each wave, with different parents or guardians potentially occupying different roles at each wave.

Unless specifically noted, all references to the child's "household" or "family" are to those of Parent 1, and do not include any other household or family the child may have with a parent living elsewhere. Similarly, unless specified in the chapter, any reference to "parents" is to Parent 1 and Parent 2, not to parents living elsewhere. In some chapters, data are reported for mothers and fathers rather than for Parent 1 and Parent 2.

Some chapters compare responses to particular questions across waves. In some cases, these questions were collected using different methods in different waves (e.g. by interview in one wave and by self-complete questionnaire in another).

This section introduces the subpopulation groups that are used in some of the chapters in this report. Most of these subpopulation groups were introduced in detail in the LSAC Annual Statistical Report 2010 (AIFS, 2011), and are summarised in Table 1.3 (child characteristics) and Table 1.4 (parent and family characteristics). The percentages shown in these three tables are based on weighted data (as described in section 1.2).

The child characteristics at the first five waves are summarised in Table 1.3.

Notes: Percentages based on weighted data. a Recorded at Wave 1. b Questions about whether the study child had a disability or medical condition were asked differently in Wave 1 so these data are not included here. c Weight status is based on body mass index. It was not calculated at Wave 1 for the B cohort.

At Wave 1, Parent 1 respondents were asked whether they mainly spoke English or a language other than English at home. Languages were classified according to the Australian Standard Classification of Languages (ABS, 2005), and these were summarised into English or non-English languages.

Child has a disability or medical condition

At each of Waves 2 to 5, Parent 1 respondents were asked whether each household member had a medical condition or disability that had lasted 6 months or more, while being shown a prompt card with a list of conditions such as sight problems; hearing problems; blackouts, fits or loss of consciousness; difficulty learning or understanding things; and difficulty gripping things.

At each wave (except Wave 1 for the B cohort), interviewers measured the children's weight and height, and these measurements were used to calculate children's body mass index (BMI). The children were then classified as overweight or obese (Cole, Bellizzi, Flegal & Dietz, 2000), underweight (Cole, Flegal, Nicholls, & Jackson, 2007) or of normal weight. Children in the B cohort at Wave 1 were not measured because of the technical difficulties of measuring infants' height and weight.4

Parent 1 respondents identified at Wave 1 whether the study child was of Aboriginal and/or Torres Strait Islander background. These results were summarised into a measure of whether the child was Indigenous or non-Indigenous.

The parent and family characteristics at the first five waves are summarised in Table 1.4.

Notes: Percentages based on weighted data. a Family socio-economic position is not currently available at Wave 5, it will be developed based on the new occupation codes in the future.

The measure of family socio-economic position (SEP), developed by Blakemore, Strazdins, and Gibbings (2009), uses information about combined annual family income, educational attainment of parents and parents' occupational status to summarise the social and economic resources available to families. The standardised SEP scores have been divided into quartiles and summarised into the lowest 25%, the middle 50% and the highest 25%.

Number of siblings in the household

At each wave, Parent 1 provides details about all household members, including the study child's siblings. Siblings include biological, adopted, foster, step- and half-siblings. Children may also have siblings who do not live in their household, but these siblings are not included here.

The language spoken by Parent 1 is classified using the same approach described for the study children above.

Parent 1 is grouped into "Australia or New Zealand born" or "born overseas" based on their country of birth provided at Wave 1.

Neighbourhood disadvantage was measured using the Socio-Economic Indexes for Areas (SEIFA) - Disadvantage. Those families living in areas in the lowest 25% SEIFA index of disadvantage are considered to be living in an area of socio-economic disadvantage.

2 For separated families in which both parents provided care for the child, the interviewer in Wave 1 worked with the family to identify who the child's Parent 1 was for the purposes of data collection. Where possible, the same parent has been kept as P1 in subsequent waves.

3 See Soloff, Lawrence, and Johnstone (2005) for more information about the study design.