6. Adolescents' relationships with their peers

6. Adolescents' relationships with their peers 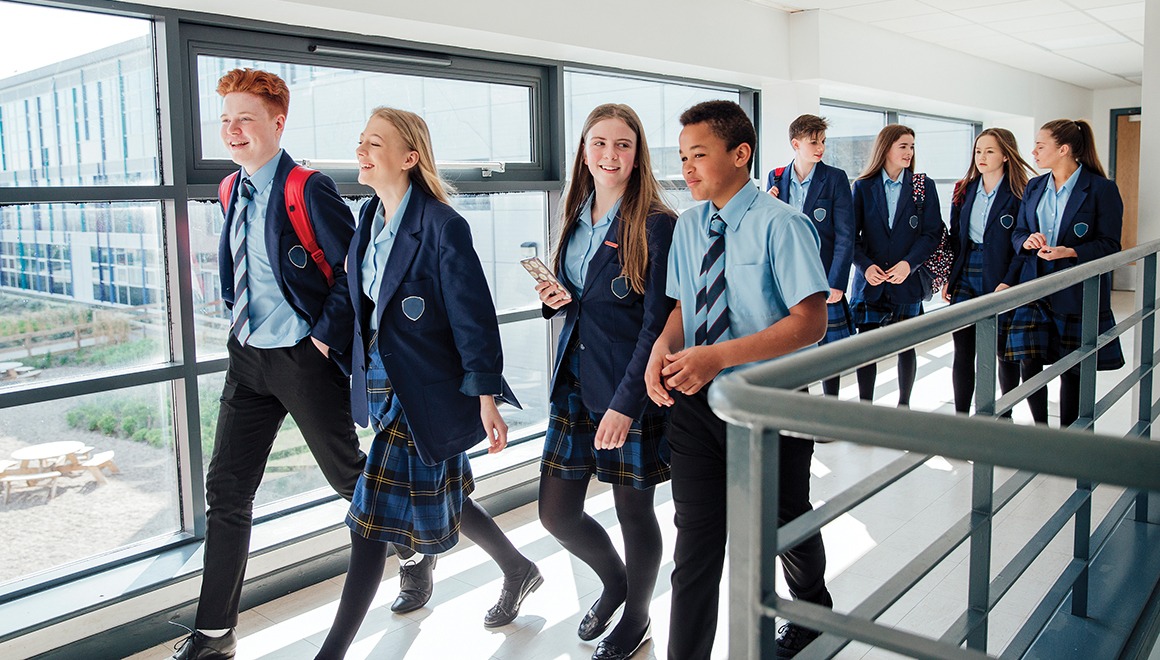 Peer relationships are very influential in adolescence. During this time, when young people are developing autonomy from their parents, peers become a significant source of social and emotional support (Gorrese & Ruggieri, 2012). Strong peer attachments have been associated with better psychological wellbeing (Balluerka, Gorostiaga, Alonso-Arbiol, & Aritzeta, 2016; Gorrese, 2016). In addition to attachment, the attitudes of adolescents' friends can have both positive and negative influences on a range of behavioural, social-emotional and school outcomes (Alexander, Piazza, Mekos, & Valente, 2001; Ryan, 2001).

When adolescents experience problems in their peer relationships, such as bullying, it can have significant psychological, physical, academic and social-emotional consequences for both victims and perpetrators (Craig & Pepler, 2003). The quality of adolescents' attachments with their peers and the attitudes of their friends may be associated with their likelihood of being involved in bullying.

The quality of peer attachments was measured in the LSAC K cohort at Waves 5 and 6 using items adapted from the Peer Attachment Scale of the Inventory of Peer and Parental Attachment. The scale included in LSAC is made up of two subscales: trust (four items) and communication (four items).

Peer attachments refer to the specific bond between one or a few peers. Secure peer attachments are characterised by bonds that satisfy adolescents' basic needs for emotional support and a 'safe haven' (Balluerka et al., 2016). Some research shows that girls tend to report higher levels of attachment to their peers than do boys. This may be due to differences in the nature of female and male friendships; with girls placing more importance on closeness and open communication in their friendships than boys (Gorrese & Ruggieri, 2012).

The quality of peer attachments in girls and boys was examined at two time points in early adolescence - around the time they started secondary school (at age 12-13) and two years later (at age 14-15). The beginning of secondary school is an important transition for adolescents, and this change in school context can result in rapid changes in friendship groups and peer social support networks. This can potentially lead to instability in peer attachments (Desjardins & Leadbeater, 2011).

At 12-13 and 14-15 years of age, 80-90% of adolescent boys and girls reported having good friends who they trusted and who they felt respected their feelings and listened to them (Figure 6.1). In both age groups, more than three quarters also reported that their friends sensed when they were upset about something. 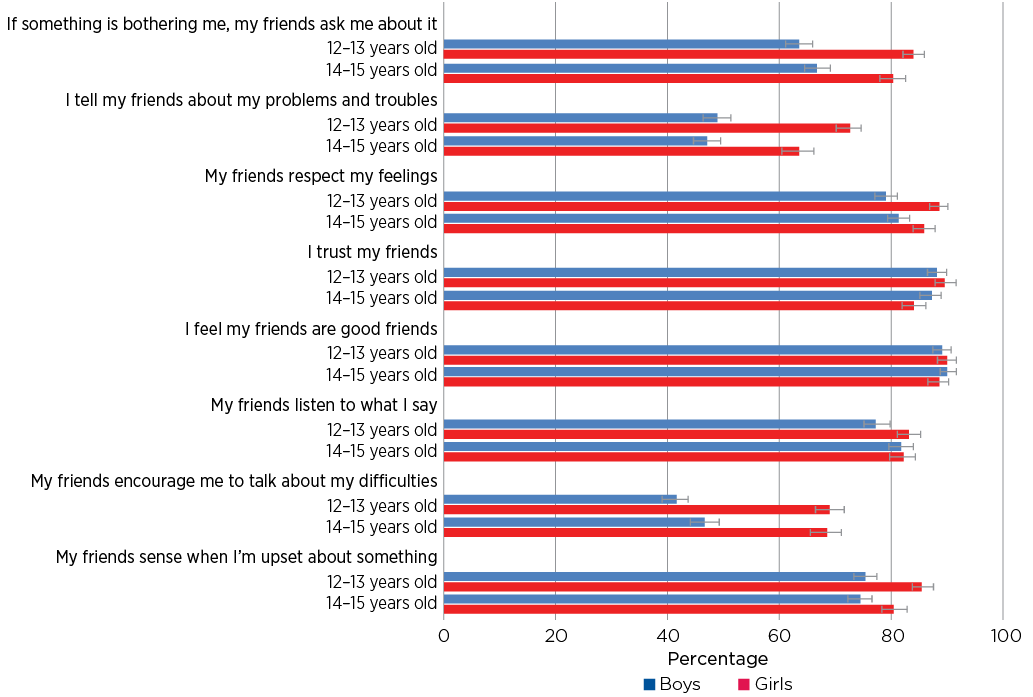 Overall, adolescent reports of their levels of peer attachment were very similar and stable at ages 12-13 and 14-15. Given this stability, the remainder of the chapter will focus on data collected about peer relationships at age 14-15.

The attitudes of an adolescents' peer group can have both positive and negative influences. While adolescents tend to select friends who have similar attitudes to them, they are also strongly influenced by the behaviour of their peers (Ryan, 2001). Research shows that adolescents are more likely to engage in risky behaviours, such as smoking, if they have friends who engage in those behaviours (Alexander et al., 2001). Alternatively, having high-achieving friends can influence adolescents' own academic achievement and enjoyment of school (Ryan, 2001).

Figure 6.2: Proportion of 14-15 year olds who reported positive academic attitudes as being true for some, most or all of the peers they spend time with 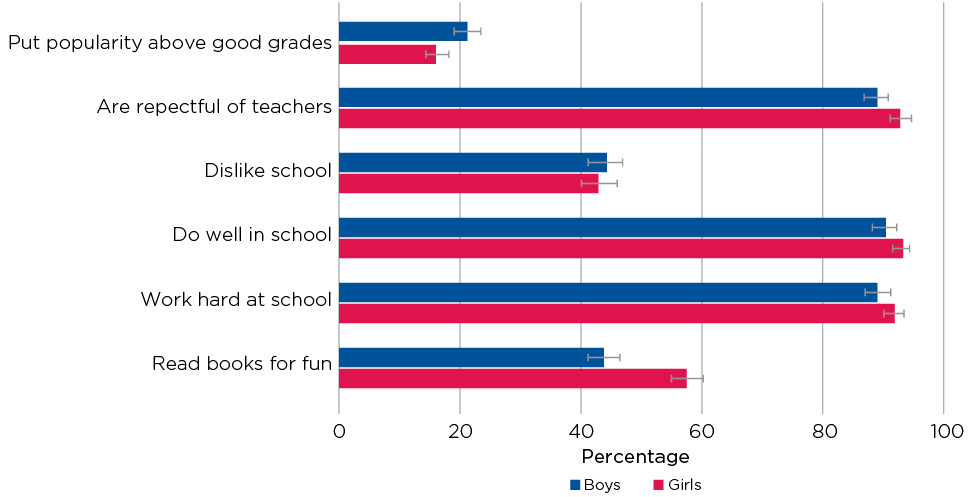 Peer group attitudes were measured in the LSAC K cohort at Wave 6 using items adapted from the 'What my Friends are Like' questionnaire and the Australian Temperament Project. Respondents were asked to indicate whether a range of positive and negative attitudes reflected the kids they spent time with (from school, their neighbourhood or elsewhere) on a five-point scale from '1 = None of them' to '5 = All of them'.

The peer group attitudes are categorised into four types of attitudes, and scale scores were obtained for each of these by summing responses across items (higher scale scores indicated peer groups that were higher on that specific characteristic):

Scores on each of the four scales were divided into two groups with peer groups scoring one standard deviation below the mean categorised as 'low' on each of the attitudes, and all other scores categorised 'high' on the specific attitudes. The categorisation was done for the whole sample separately for both age groups.

Figure 6.3: Adolescents who said they had friends who were respectful of teachers and worked hard at school 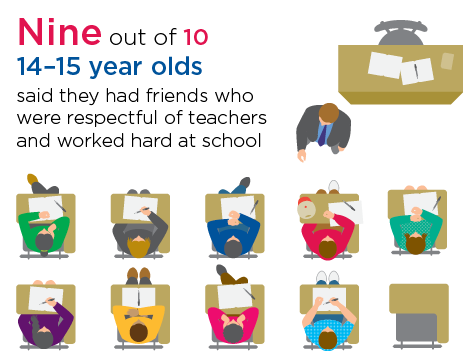 Around 5-7% of girls and boys said that some, most or all of their friends engaged in risky behaviours such as trying drugs, smoking cigarettes, breaking the law and getting into fights (Figure 6.5). About 14% of girls and 10% of boys said they had friends who drank alcohol, which is similar to the proportion of 14-15 year olds who previously reported having consumed an alcoholic drink (Homel & Warren, 2016).

Figure 6.4: Proportion of 14-15 year olds who reported moral behaviour attitudes as being true of some, most or all of the peers they spend time with 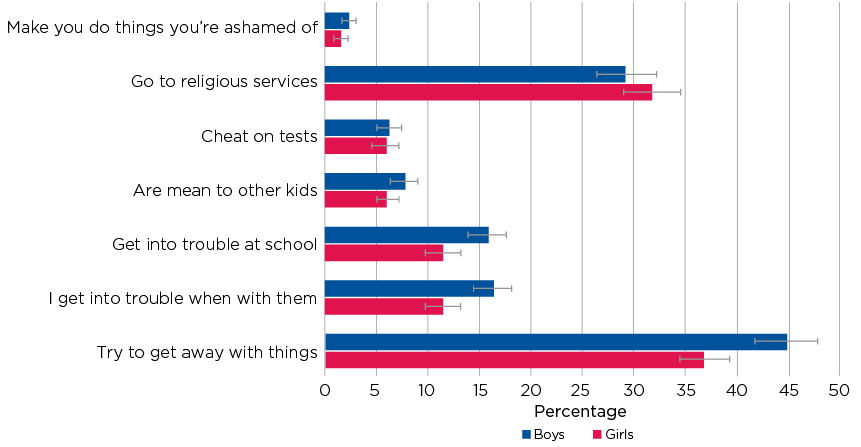 Figure 6.5: Proportion of 14-15 year olds who reported risky behaviour attitudes as being true of some, most or all of the peers they spend time with 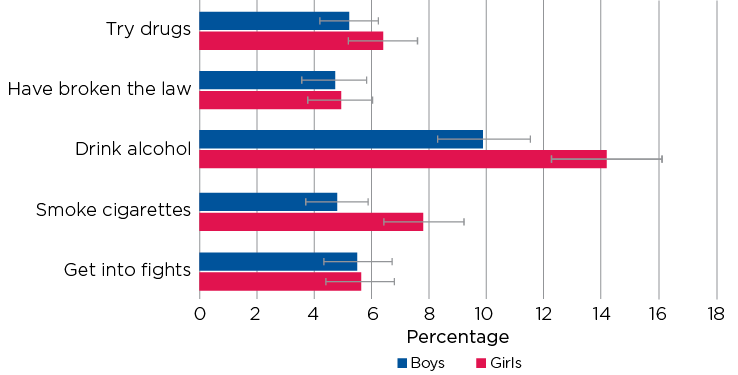 While positive peer relationships are associated with good adolescent adjustment and wellbeing, problems in adolescent peer relationships can be detrimental. Bullying in particular is a major adolescent health concern internationally (Craig et al., 2009). It can take direct forms such as physical and verbal aggression and indirect forms such as social exclusion (Craig et al., 2009). Gender differences have been found in the types of bullying experienced by adolescents. Boys are more likely to experience physical aggression, whereas girls are more likely to experience social aggression such as isolation and gossip (Carbone-Lopez, Esbensen, & Brick, 2010; Craig & Pepler, 2003).

Bullying has been defined as intentional and repeated aggressive behaviour towards a peer that causes them harm (Smith et al., 1999). At Wave 6, study children (age 14-15 years) were asked to report on their experiences of both bullying victimisation and perpetration.

LSAC study children were asked whether or not in the past month (30 days) they were the victim (e.g. 'kids hit or kicked me on purpose', 'kids said mean things to me or called me names') or perpetrator (e.g. 'I hit or kicked someone on purpose', 'I said mean things to someone or called someone names') of a range of bullying acts. Those who reported being victims or perpetrators of bullying were also asked how frequently the bullying had occurred in the past month from '1 = once or twice' to '3 = several times a week'.

Looking at more specific acts of bullying that adolescents reported being the victim of:

The most common act of bullying that both boys (9%) and girls (8%) reported perpetrating was saying mean things to someone or name calling, which is not surprising, given this was also the most frequent act of bullying reported by victims (Figure 6.9). More boys than girls reported being physically aggressive towards others. For example, 8% of boys and 2% of girls reported grabbing or shoving someone on purpose. Around 4% of boys and 2% of girls had threatened to hurt someone. A similar proportion of boys and girls (1-3%) reported engaging in acts of social exclusion, such as not letting someone join in with what they were doing or preventing others from being friends with their victim. All other bullying acts were reported by less than 1% of 14-15 year olds.

Figure 6.8: Proportion of 14-15 year olds who reported being a victim of bullying in last 30 days, by gender 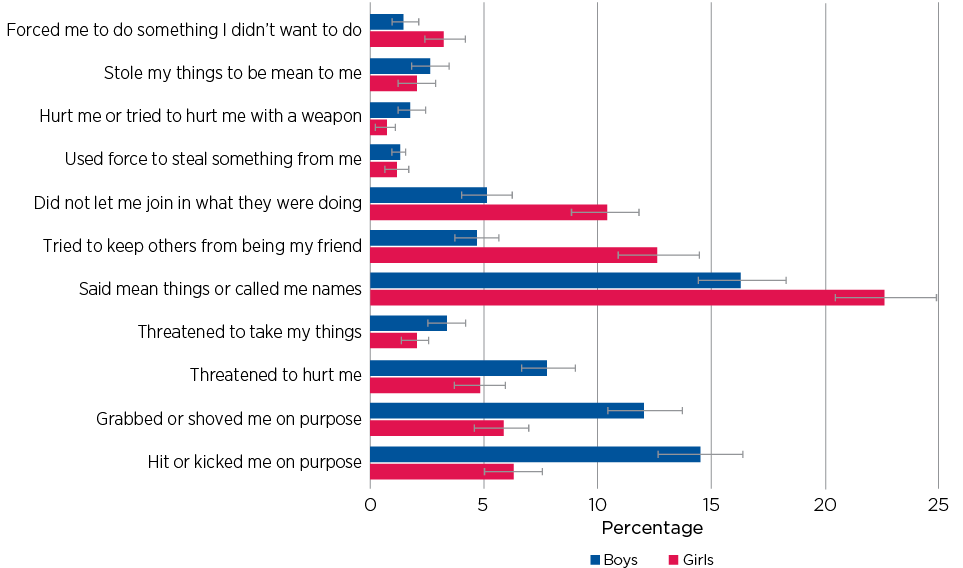 Figure 6.9: Proportion of 14-15 year olds who reported bullying in last 30 days, by gender 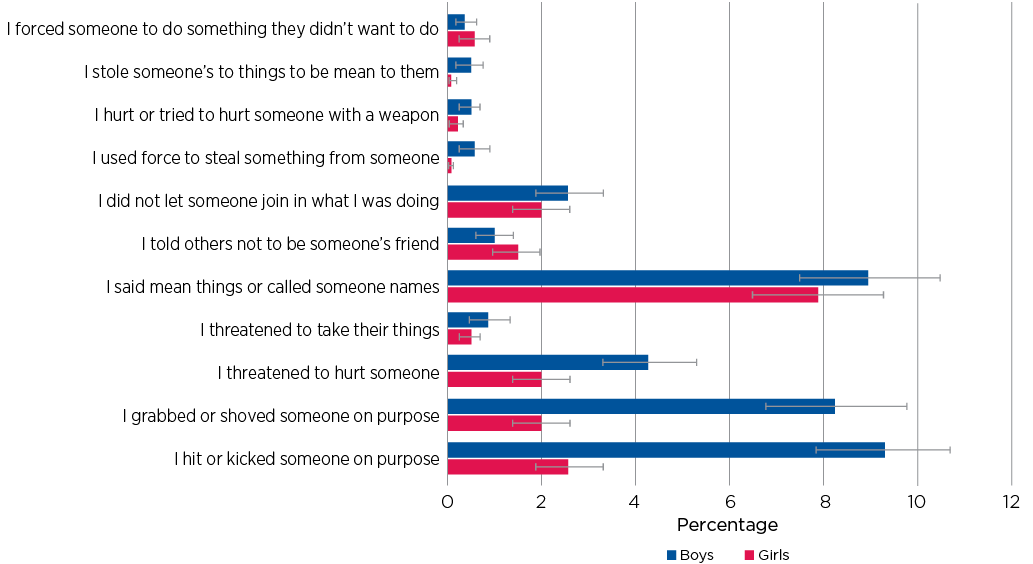 Associations between bullying and features of adolescent peer relationships

The types of peers that adolescents are friends with may also be associated with their bullying involvement. For instance, research suggests that bullies tend to hang out with other bullies, and peers who are aggressive or antisocial (Espelage & Holt, 2001). Victims of bullying are also more likely to be friends with other children who have also been victimised or who lack characteristics to successfully defend against bullying (Rodkin & Hodges, 2003).

The association between adolescents' status as a victim or bully in the past month and their peer attachments and peer group attitudes was examined, taking into consideration other factors such as self-efficacy, empathy and prosocial behaviour.

This chapter provides a picture of the quality of peer relationships of Australian children around the time of mid-adolescence and sheds some light on the attitudes of adolescents' friends. Understanding who adolescents choose to spend their time with can help us to understand their own attitudes and behaviours. The majority of adolescents (86% of girls and 82% of boys) reported that their friendship groups displayed positive attitudes, including positive attitudes towards school and academic achievement and positive moral behaviour. Only a small proportion, around one in eight, reported that high levels of risky behaviours characterised the friends they spent time with.

Bullying is a major source of stress arising from adolescents' interactions and relationships with their peers, and a major public health concern facing schools and policy makers. The findings from this chapter show that around one fifth of adolescents aged 14-15 reported being the victim of bullying in the past month. However, only around 7% of adolescents admitted to being perpetrators of bullying.

The data show that having positive peer attachments, friends with a positive orientation towards academic achievement or high levels of moral behaviour were each associated with a reduced likelihood of being a victim of bullying. Conversely, having friends who engaged in high levels of risky behaviours was associated with a greater likelihood of having been the victim of bullying. Only peer group attitudes, and not peer attachment, were associated with being a perpetrator of bullying. Adolescents whose peers had shown high levels of moral behaviour were less likely to have reported that they had bullied someone, while those whose peers engaged in more risky behaviours were more likely to have reported that they had been a bully.

This chapter raises a number of important questions for future work in this area. A better understanding of the causal role that different features of adolescents' friendships play in their social-emotional development will help to inform how peer relationships can be targeted by efforts to promote adolescent wellbeing and prevent and treat the development of psychological difficulties.

Balluerka, N., Gorostiaga, A., Alonso-Arbiol, I., & Aritzeta, A. (2016). Peer attachment and class emotional intelligence as predictors of adolescents' psychological well-being: A multilevel approach. Journal of Adolescence, 53, 1-9.

Gorrese, A., & Ruggieri, R. (2012). Peer attachment: A meta-analytic review of gender and age differences and associations with parent attachment. Journal of Youth and Adolescence, 41(5), 650-672.

Ryan, A. M. (2001). The peer group as a context for the development of young adolescent motivation and achievement. Child Development, 4, 1135.