Injury is the leading cause of death and a major cause of disability among Australian adolescents. Often believed to be the consequence of random events, injuries are largely preventable. Much of what we currently know about adolescent injury is based on hospital emergency and admission data. However, not all injuries require hospital treatment, so the true extent of injury within the community is likely to be underestimated. Longitudinal studies that collect information on young people's experiences of injury at multiple time points can help us to better understand how and where injuries happen and identify factors that might increase the risk of injury at different ages.

Using data from Growing Up in Australia: The Longitudinal Study of Australian Children (LSAC), this snapshot looks at 16-17 year olds' experiences of injury, with a focus on their most serious injury within the previous two years. Injuries did not have to result in hospital treatment to be included in the analyses. Three main questions are addressed: (1) How common is injury among Australian adolescents? (2) What is the nature of adolescent injuries (type, place, cause, person treating)? (3) What personal and environmental factors increase the risk of adolescent injury?

In 2016, when aged 16-17, study adolescents reported the number of injuries they had experienced in the previous two years that had resulted in them missing two or more days of school or work. Further details were collected about what they considered to be their most serious injury during this period, such as injury type, cause, where it had happened and who provided treatment.

How common is adolescent injury?

Injury was common among adolescents, with higher rates for males. In 2016, more than one in five (22%) 16-17 year olds reported being injured in the previous two years (Figure 1). This equates to 53,512 Australian adolescents sustaining a significant injury or injuries.

More males than females had been injured (25% vs 19%). Similar gender differences have been found in other injury research using hospital admission and mortality data to examine rates of injuries among this age group. 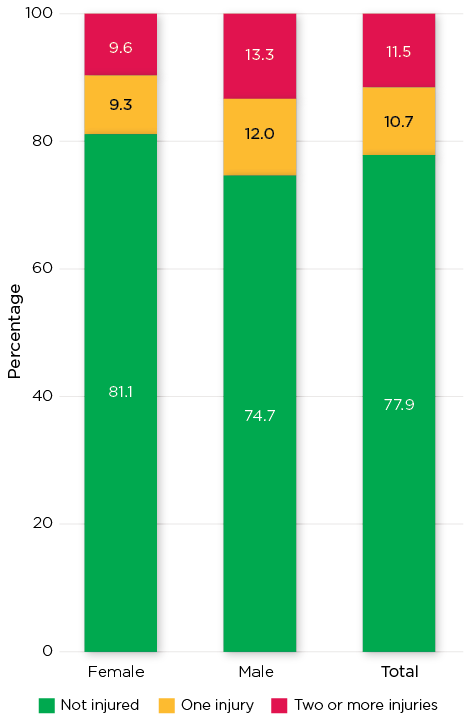 What is the nature of adolescent injuries?

Adolescents were asked further questions about their recent injury (or their most serious injury if they had had multiple injuries). Questions included cause of injury; type of injury; where the injury happened; who treated the injury and the number of days of school or work missed due to injury.

Other causes of significant injury were much less prevalent, with the next most common causes being falls, transport-related injuries (including car, motorbike, bicycle and pedestrian injuries) and collisions. 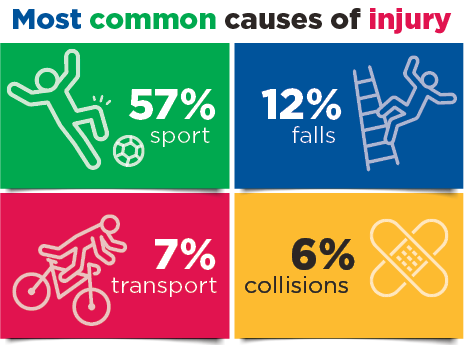 Adolescents were not asked whether their injuries were intentional or unintentional. While not directly comparable, parent survey responses indicated that 95% of injuries experienced by their children aged 16-17 in the previous year were unintentional.

Because sports injuries were the most common cause of injury among adolescents and accounted for more than 50% of all injuries, results are reported separately for sports and non-sports injuries throughout the remainder of the snapshot. It should be noted that 'non-sports injuries' include a wide range of causes (e.g. falls, transport-related causes, animal contact, collision with or being struck by a person or object).

The types of injuries sustained playing sport and in other settings differed somewhat, with a greater range of injury types being reported in non-sports settings.3

Where the injury happened

Notes: Respondents were asked to consider their most serious injury in the past two years. 'Other' injury locations were unspecified. 'Outside public place' includes areas such as playgrounds, sportsgrounds, beaches or public parks and excludes roads. 'Inside public place' includes areas such as gyms, indoor sports centres or shopping centres.
Source: LSAC K cohort, Wave 7, weighted. n = 387 for sports injury, n = 262 for non-sports injury

Who treated the injury?

A wide range of people treated adolescent injuries. Most injuries (69% of sports-related and 62% of non-sports-related) were treated outside a hospital environment. While it was common for adolescents to seek treatment from medical professionals, other people such as parents, teachers, coaches and allied health professionals were also often involved in injury treatment.5 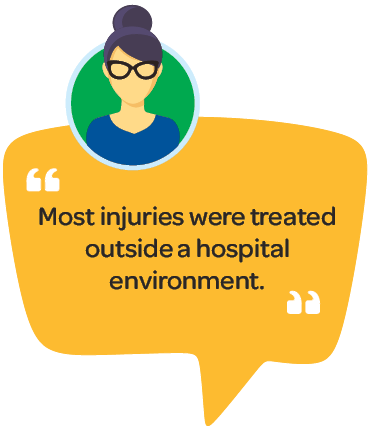 Sports injuries were most commonly treated by a:

27% of sports injuries were treated by multiple people.

Non-sports injuries were most commonly treated by a:

35% of non-sports injuries were treated by multiple people.

Days of school or work missed

Non-sports injuries were associated with higher absenteeism than sports injuries. On average, approximately four days of school or work were missed due to a non-sports injury, compared to three days for sport injuries.6 No gender differences were found. 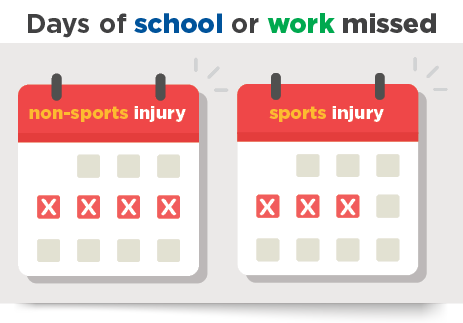 Who is more likely to be injured?

A range of factors were associated with an increased risk of injury among adolescents. A history of prior injury (between ages 12-15) was related to a markedly increased risk of both sports and non-sports injuries at 16-17 years. Compared to those with no prior injury, adolescents with a prior injury were at a 1.7 times greater risk of sustaining a sports injury (17% vs 10%; Figure 3) and a 1.8 times greater risk of having a non-sports injury (14% vs 8%; Figure 4), even after accounting for a broad range of other factors associated with injury risk (see supplementary materials for details).7

Figure 3: Percentage of adolescents with a sports injury, by adolescent characteristics 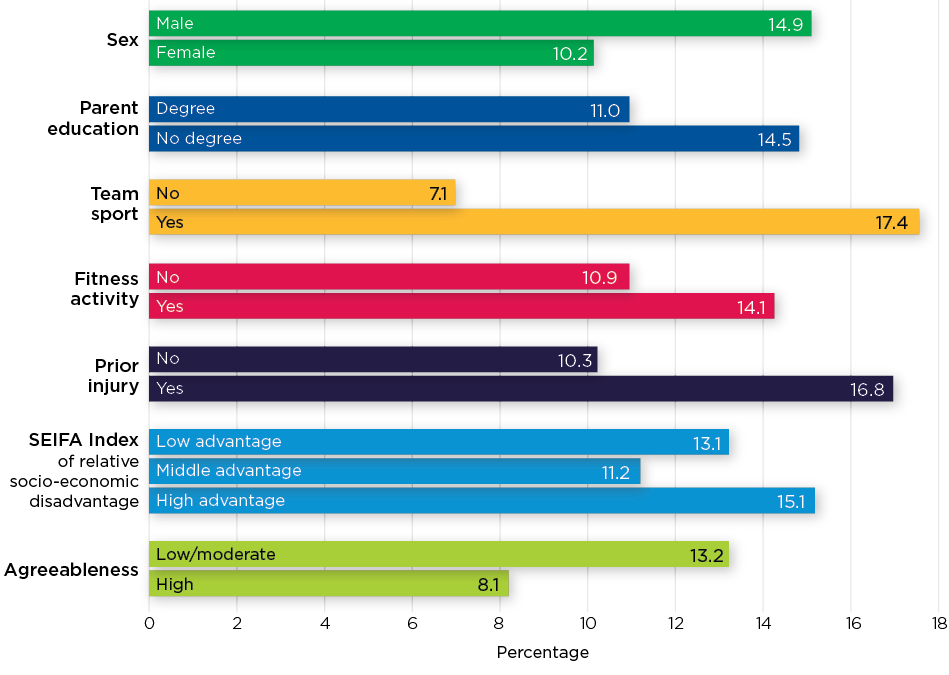 Other factors related to the risk of adolescent sports injuries were:

Figure 4: Percentage of adolescents with a non-sports injury, by adolescent characteristics 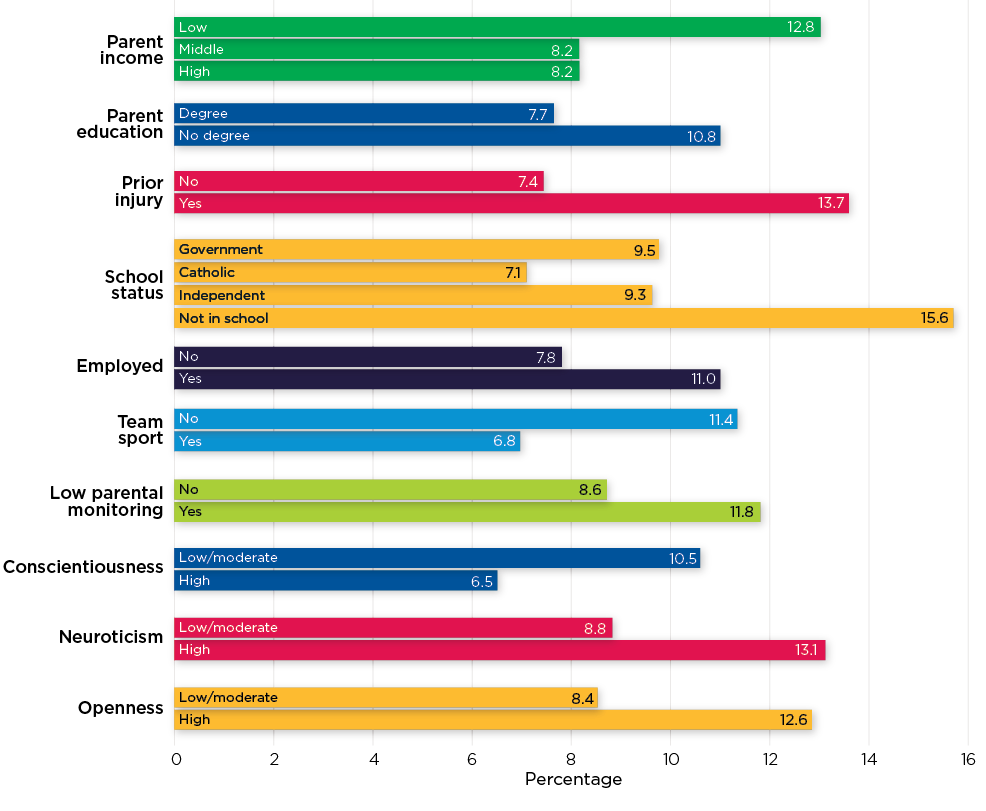 In addition to prior injury, other factors related to adolescent non-sports injuries were:

These findings show that adolescent injury is relatively common and can have significant impacts on school and work participation, highlighting the importance of injury prevention to improving adolescent health. The findings suggest:

Data from Growing Up in Australia: The Longitudinal Study of Australian Children (LSAC) provide comprehensive and useful insights into adolescent injuries, including information about the substantial number of injuries not requiring hospital treatment. The broad range of contextual information across childhood available in LSAC provides a comprehensive picture of the circumstances that lead to injury, informing prevention efforts. Further follow-up of the LSAC sample will continue to provide details of injury and re-injury as adolescents mature into adults, as well as ongoing problems arising from injury. For example, the following questions could be investigated:

Technical details of this research, including descriptions of measures, detailed results and bibliography are available to download as a PDF [200 KB]

1 Full results are available in Table S1 of the supplementary materials.

2 Full results are available in Table S2 of the supplementary materials.

3 Full results are available in Table S3 of the supplementary materials.

4 Full results are available in Table S4 of the supplementary materials.

5 Full results are available in Table S5 of the supplementary materials.

6 Full results are available in Table S6 of the supplementary materials.

7 Full results are available in Table S7 of the supplementary materials.

This snapshot benefited from academic contributions from Kelly Hand and Dr Jennifer Prattley.