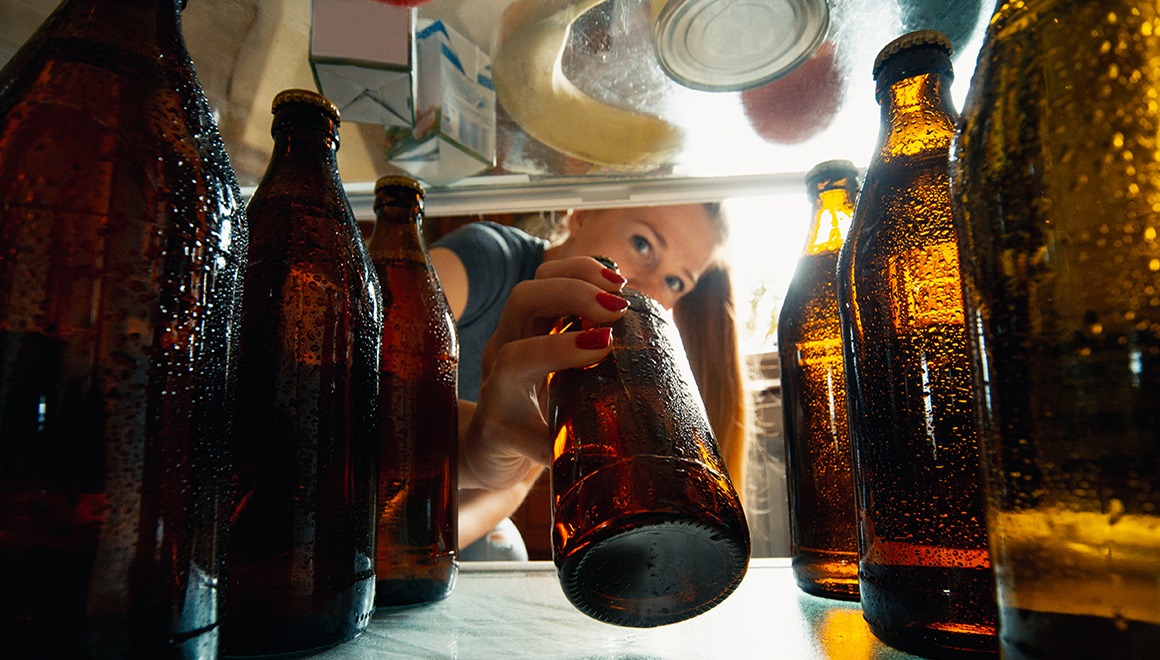 Although more young Australians are delaying their first alcoholic drink, many still begin drinking before 18. In addition to experiencing negative drinking-related outcomes such as injuries and mental ill-health, early alcohol use can lead to harmful drinking practices and alcohol use disorders later in life. Adolescent alcohol consumption can also adversely affect brain development. Identifying modifiable factors associated with adolescent alcohol use, such as parenting practices, is important for preventing alcohol-related harms among young people.

Prior to 2009, in Australia, official advice suggested that alcohol use was a 'normal' part of adolescent development, and that supervised alcohol consumption could reduce potential harm. Therefore, parents may choose to allow their underage teens to drink at home to help young people learn responsible drinking practices. However, with mounting evidence about the numerous risks of underage alcohol use, current National Health and Medical Research Council (NHMRC) guidelines1 suggest delaying alcohol use until at least the age of 18.

Among teens who had ever drunk alcohol, those with permission to drink at home were significantly more likely to have drunk in the past month (77%, compared to 63%) and in the past week (49%, compared to 34%).

Australian teens aged 16-17 years are the focus of this snapshot. For the first time in 2016 (Wave 7), parents were asked questions about whether they allowed their children to drink alcohol at home, and whether their children were allowed to take alcohol to parties or other social events. Since 2012 (Wave 5), study children have been asked whether they have ever drunk alcohol. If they have, they are asked further questions about their recent and current patterns of drinking and their experience of certain alcohol-related harms. For this snapshot, 'underage drinking' is defined as alcohol use before the age of 18, the legal purchasing age in Australia.

How many teens are allowed to drink at home?

In 2016, just over one-quarter (28%) of Australian teens aged 16-17 had permission from their parents to drink at home. This was similar for females (29%) and males (27%). Parental reports indicate that, of the teens permitted to drink at home, most (70%) did so less frequently than monthly, and around 2% drank alcohol at home on at least a weekly basis. One-fifth (20%) had never drunk alcohol at home or had not done so in the past year, despite being allowed to.

Close to one-fifth (18%) of teens aged 16-17 years had parents who allowed them to take alcohol to parties or social events. This group was mostly (75%) comprised of teens who were also allowed to drink at home. Again, there was little difference between female (19%) and male (17%) teens with regard to being allowed to take alcohol to parties/social events. 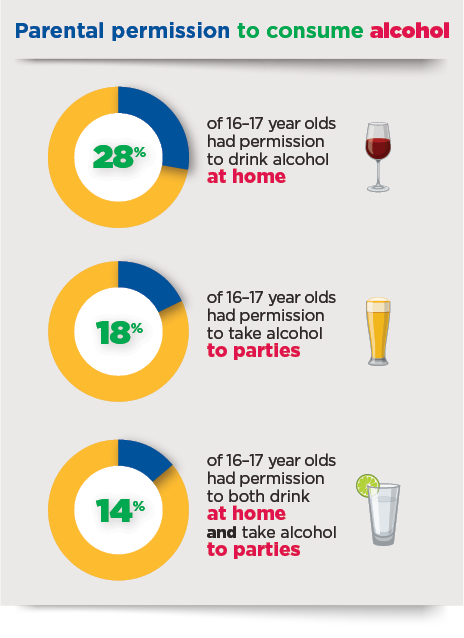 Does permission to drink at home result in teens drinking more?

Recent and current alcohol use 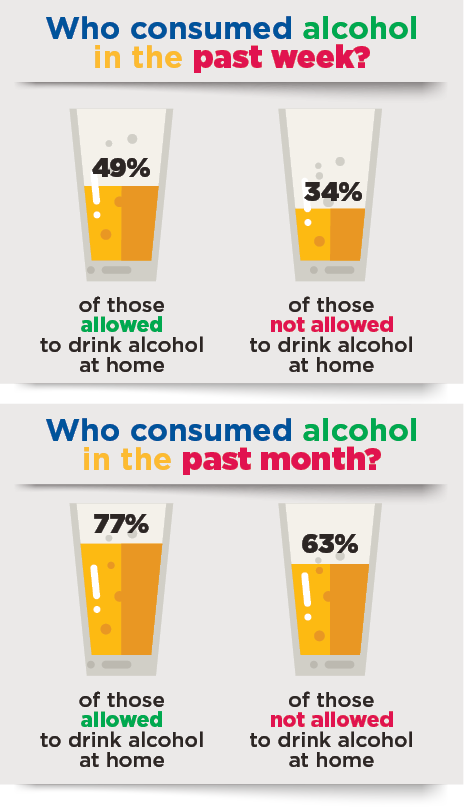 Are teens allowed to drink at home more likely to experience alcohol-related harms?

Alcohol use can lead to numerous types of harms, including negative physical, mental, financial and social outcomes such as:

Teens whose parents permitted them to drink at home were significantly more likely to have ever experienced any alcohol-related harm (i.e. one or more of the above harms) compared to those not allowed to drink at home (23% vs 17%, respectively).

Which teens are more likely to be allowed to drink at home?

When taking a number of socio-demographic and psychosocial characteristics into account in a multivariable analysis, the following parental (primary parent/carer), familial and individual factors were found to be associated with an increased likelihood of teens aged 16-17 years being permitted to drink at home:3

Factors not significantly associated with permitting teens to drink at home included: sex of adolescent and primary parent, Indigenous status of adolescent, language background, and level of parental monitoring.

When taking socio-demographic and psychosocial factors into account,6 having a primary parent/carer with a history of alcohol problems (as a child and/or as an adult) was not associated with allowing an adolescent to drink at home underage. However, having a primary parent who drank at all when their child was aged 14-15 years was significantly associated with allowing teens to drink at home when they were aged 16-17 years.

More frequent alcohol consumption by parents was associated with a greater likelihood of allowing teens to drink at home. When taking key characteristics into account (e.g. socio-economic status, family structure, parent age), each incremental increase in parental drinking frequency was associated with a 23% increase in the odds of parents allowing their 16-17 year old teen to drink at home, compared to parents who did not drink at all. 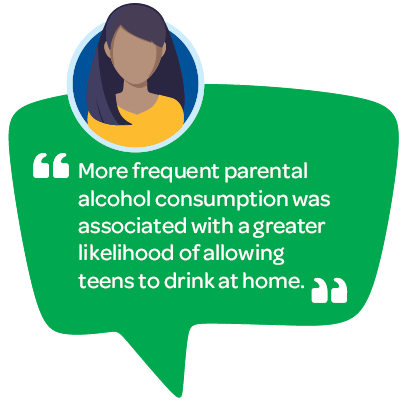 These findings reveal that, in 2016, a significant proportion of parents allowed their teens aged 16-17 to drink alcohol at home. Given previous harm reduction recommendations, some Australian parents might think that if they allow their child to drink alcohol in moderation at home (such as having a beer or glass of wine at home with dinner), this will lead to a more responsible relationship with alcohol. However, greater rates of recent alcohol use and an increased likelihood of experiencing alcohol-related harms among those with permission to drink at home provide further evidence to support the NHMRC's guideline that children and people under 18 years of age should not drink alcohol, even in environments or circumstances that might be considered 'low risk'.

To this end, parents can reduce their child's risk of harm by encouraging them to delay drinking alcohol for as long as possible. Educating parents and their children about current national alcohol use guidelines and alcohol-related consequences among young people, such as via the media and schools, might help to address alcohol harms in Australia.

Understanding when and how teens start drinking, and changes to drinking patterns over time, is important for identifying opportunities for interventions to address alcohol-related harms in Australia. Changes to alcohol legislation warrant ongoing investigations of any resultant impacts on the drinking practices and experiences of young people. The ongoing nature of LSAC will allow us to monitor this. Specific research questions to answer using LSAC data include:

2 Data on volume of alcohol consumed were only collected for the past week (see the supplementary materials).

3 For the full results see Table S1 of the supplementary materials.

4 This measure uses the SEIFA index of relative socio-economic disadvantage.

5 Areas are rated by the Australian Statistical Geography Standard (ASGS).

6 For the full results see Table S1 of the supplementary materials.

Quinn, B. (2021). Alcohol use among teens allowed to drink at home (Growing Up in Australia Snapshot Series - Issue 2). Melbourne: Australian Institute of Family Studies.