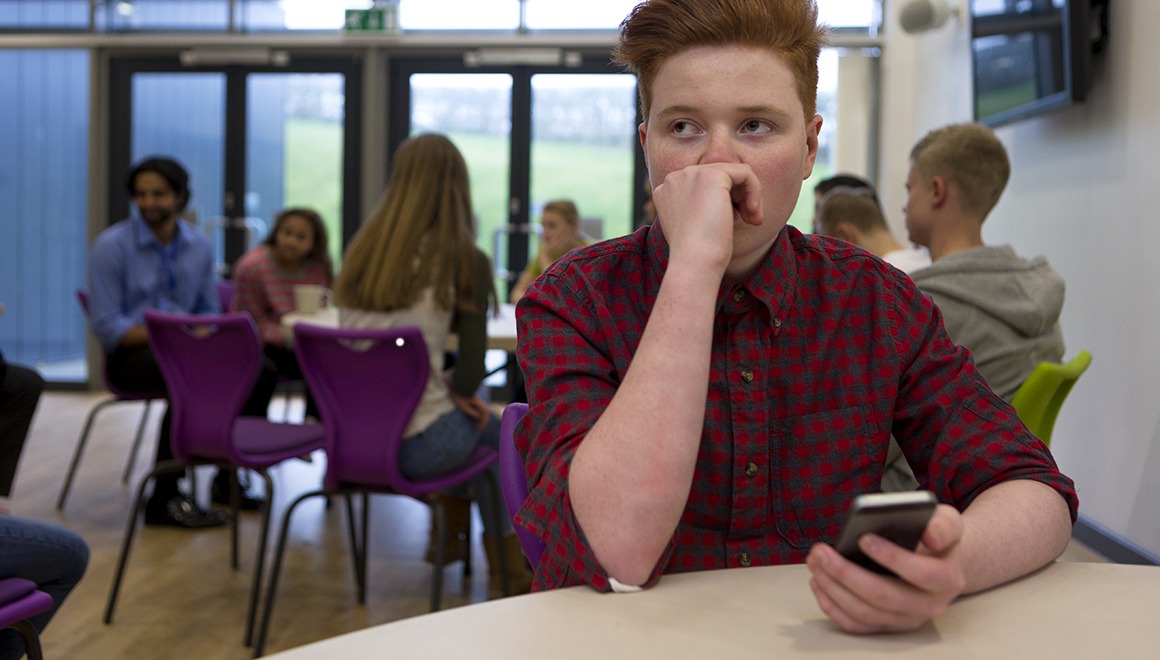 This snapshot reports the experiences of various types of perceived discrimination among Australian teenagers in the secondary school years. This is a period of rapid developmental changes, increased self-awareness and higher sensitivity towards peer approval. It addresses three main questions: (1) How common is discrimination? (2) Who is most at risk of discrimination? (3) What are the impacts of discrimination on teenagers' mental wellbeing?

According to new research released today by the Australian Institute of Family Studies (AIFS), one in three Australian teens report that they recently experienced discrimination.

Children as they passed through the secondary school years are the focus of this snapshot.1 These children reported on their experiences of discrimination when they were 12-13 years old in 2012, 14-15 years in 2014 and 16-17 years old in 2016.

Teens were asked whether, in the past six months, they had been treated unfairly or badly because of their race (language or accent, skin colour or cultural background), a disability, or religious beliefs at ages 12-13, 14-15 and 16-17 years; their body or appearance, sexual identity or mental health problems at ages 14-15 and 16-17 years; and their sex at age 16-17 only.

How common is discrimination? 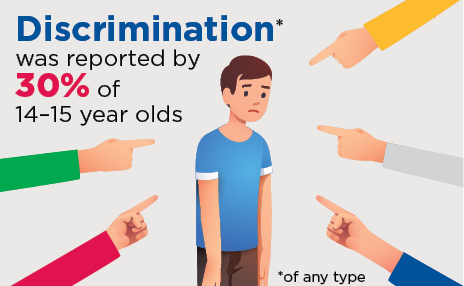 Discrimination based on body size, shape or physical appearance was the most common type of discrimination, reported by one in five (20%) Australian teens at both age 14-15 and 16-17 (Figure 1). 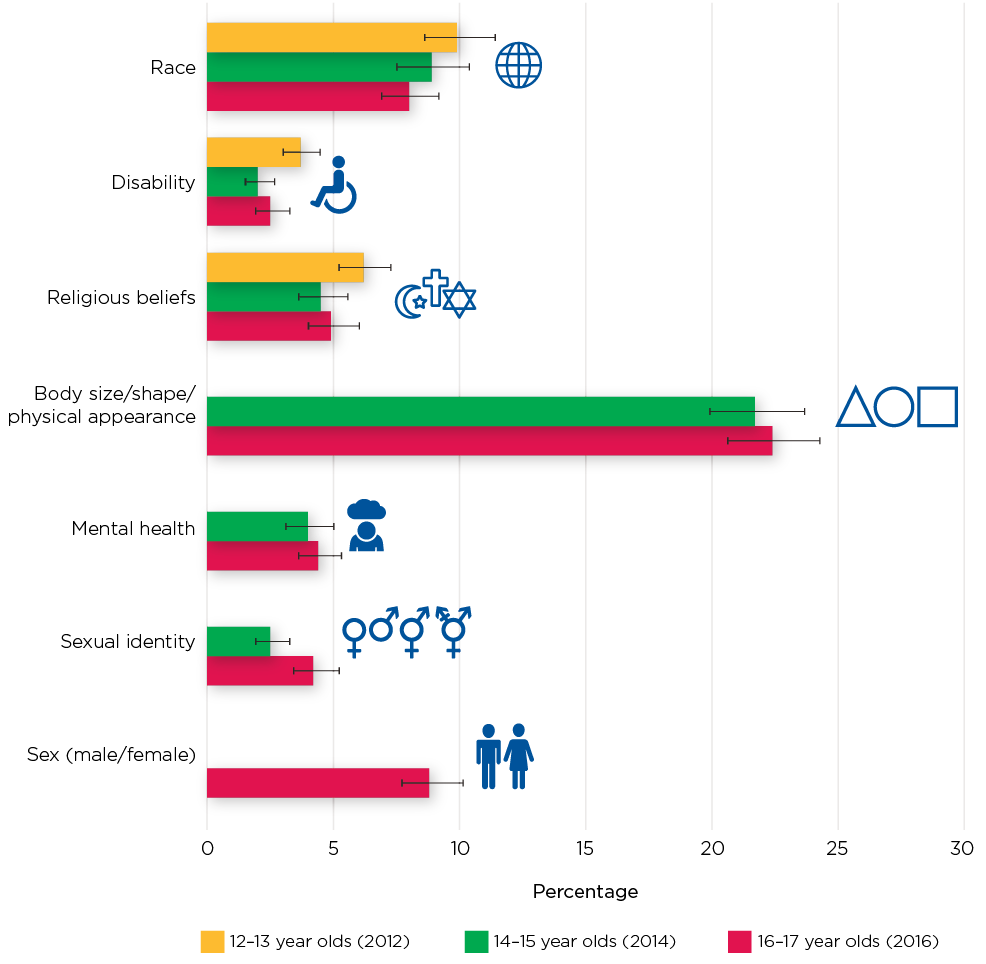 Notes: Data on discrimination due to body size/shape/physical appearance, mental health and sexual identity were available at ages 14-15 and 16-17 years only. Data on discrimination due to sex were available at age 16-17 years only. The analysis sample was restricted to study participants who answered the relevant discrimination question at all available waves. 95% confidence intervals are shown by the 'I' bars at the end of each bar. Where confidence intervals for the groups being compared do not overlap, this indicates that the differences in values are statistically significant.

Who is at risk of discrimination? 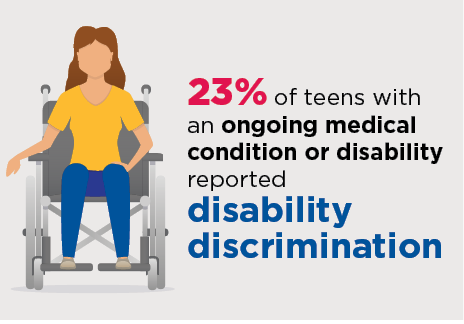 What is the impact of body discrimination on mental wellbeing? 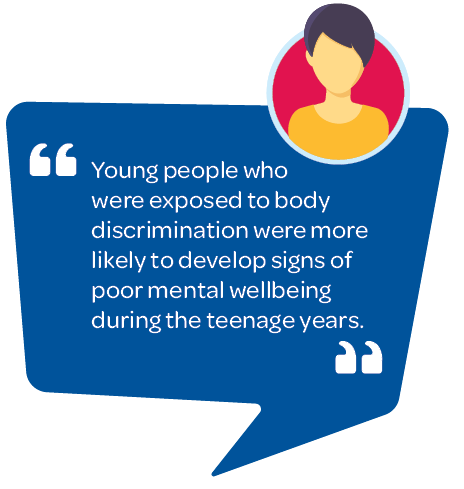 Late and repeated body discrimination were both associated with a higher likelihood of depressive symptoms, anxiety and non-suicidal self-injury or suicide; and a lower likelihood of happiness among 16-17 year olds, even when taking the sex of the teen and mental wellbeing earlier in the teen years into account. These findings show that 67% of those experiencing repeated body discrimination can be expected to develop depressive symptoms, around half (48%) will develop high levels of anxiety, and just over a quarter (26%) will injure themselves or attempt suicide.

Figure 2: Relationship between exposure to body discrimination and aspects of mental wellbeing at age 16-17 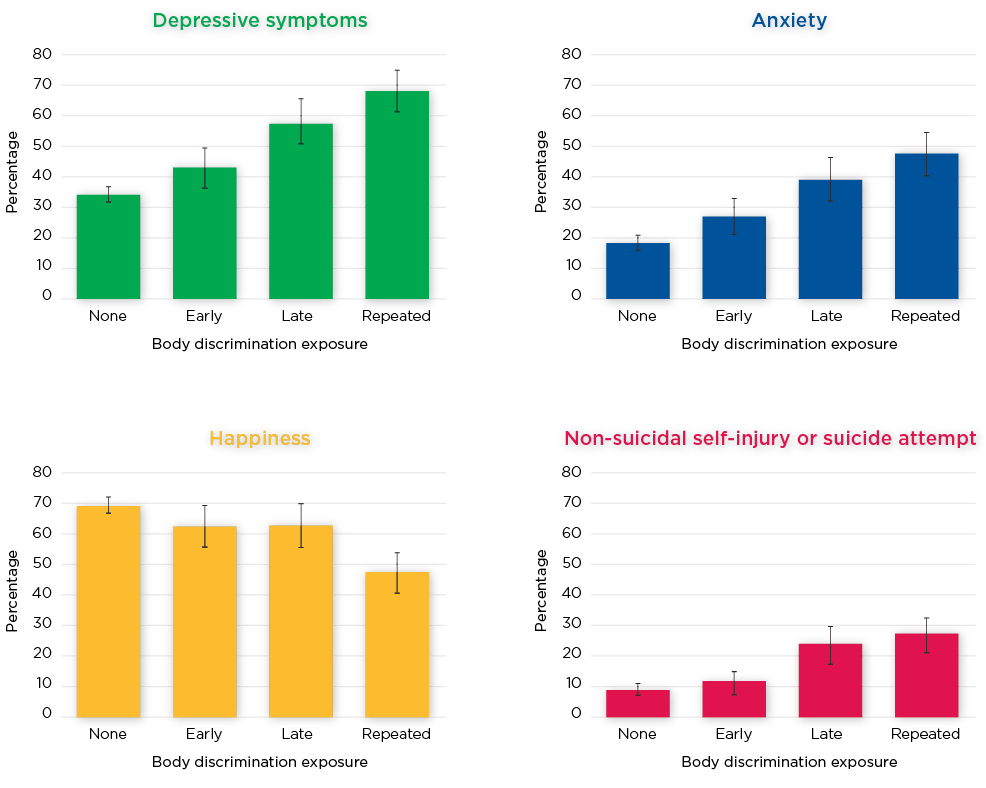 Notes: Percentages are predicted from logistic regression models including sex and corresponding mental health characteristics at age 12-13 as covariates. Non-suicidal self-injury and suicide attempts were not assessed at age 12-13 so this analysis controlled for depressive symptoms at age 12-13. Body discrimination categories are 'Early' - exposure at age 14-15; 'Late' - exposure at age 16-17; 'Repeated' - exposure at ages 14-15 and 16-17. 95% confidence intervals are shown by the 'I' bars at the top of each column. Where confidence intervals for the groups being compared do not overlap, this indicates that the differences in values are statistically significant.
Source: LSAC K cohort, Waves 5-7, weighted. n = 2,563 for happiness, n = 2,553 for depressive symptoms and anxiety, n = 2, 547 for non-suicidal self-injury or suicide attempt.
Credit: The Longitudinal Study of Australian Children 2021 (creativecommons.org/licenses/by/4.0/)

What is the impact of multiple types of discrimination on mental wellbeing?

Figure 3: The percentage of 16-17 year olds predicted to report signs of mental wellbeing according to the number of types discrimination experienced 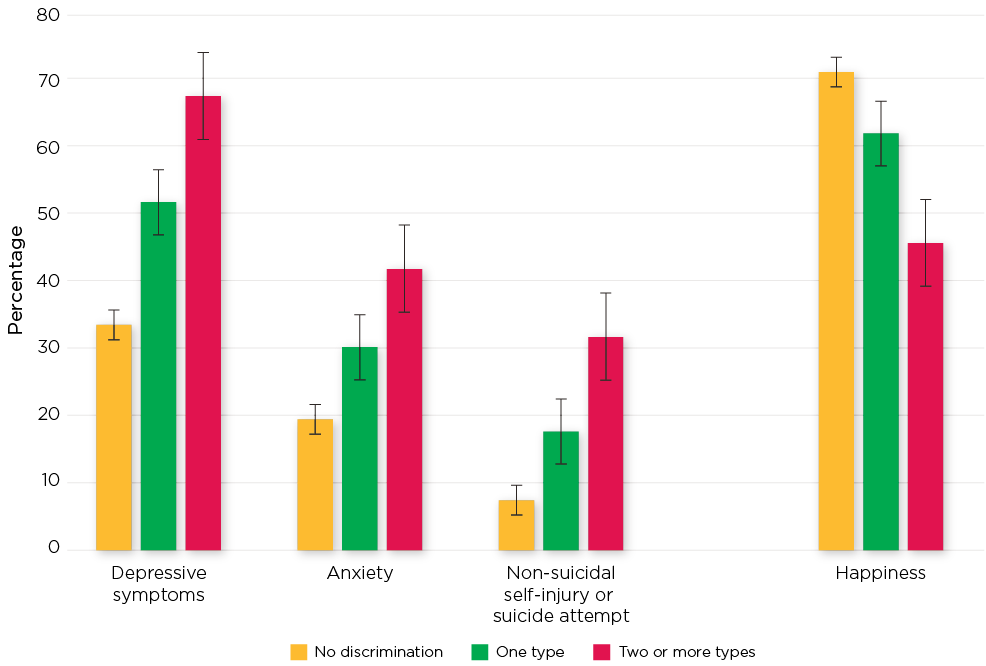 Notes: Percentages are predicted from logistic regression models including sex and corresponding mental health characteristic at age 12-13 as covariates. Non-suicidal self-injury and suicide attempt were not assessed at age 12-13 so this analysis controlled for depressive symptoms at age 12-13. The number of discrimination types is a count of experience of the following discrimination types: race, disability, religious beliefs, body size/shape/physical appearance, mental health, sexual identity, and sex discrimination. The percentages of 16-17 year olds experiencing none, one or two or more types of discrimination were 67.0%, 18.6% and 14.4% respectively. 95% confidence intervals are shown by the 'I' bars at the top of each column.
Source: LSAC K cohort, Wave 7, weighted. n = 2,744 for depressive symptoms, n = 2,746 for anxiety, n = 2,834 for happiness, n = 2,818 for non-suicidal self-injury or suicide attempt
Credit: The Longitudinal Study of Australian Children 2021 (creativecommons.org/licenses/by/4.0/)

The findings highlight that discrimination persists as a problem in modern Australian society, with almost a third of Australian teenagers reporting having experienced one or more types of discrimination. Experience of discrimination can have damaging effects on mental wellbeing. Given the adolescent years are already a period of vulnerability, it is important to take action to reduce discrimination and its impact.

The research evidence suggests this can be achieved by promoting inclusion and diversity in all aspects of children's lives, starting from a young age and using a multifaceted approach. Schools are important learning and social environments, and evidence-based universal school interventions that target multiple levels of the school system - including policy, professional training and support, curriculums, co-curricular activities and student behaviour - are likely to be beneficial. In addition, broader community social messaging and parent interventions to improve understanding of diversity and promote acceptance and tolerance are likely to reduce teenagers' exposure to discrimination.

There is limited research about the patterns of discrimination among Australian teens and their impact. Further analysis of the Growing Up in Australia data could provide a more comprehensive picture of the current and future problems associated with discrimination. For example, the following questions could be investigated:

Technical details of this research, including description of measures, detailed results and bibliography are available to download as a PDF [523 KB]

3 Full details of analysis and results are available in the supplementary materials growingupinaustralia.gov.au/sites/default/files/lsac-snapshot-1-discrimination-supplementary.pdf

4 Full details of analysis and results are available in the supplementary materials growingupinaustralia.gov.au/sites/default/files/lsac-snapshot-1-discrimination-supplementary.pdf

5 One group that may be at higher risk of discrimination is young people who identify as non-binary, transgender or gender diverse. It was not possible to examine discrimination reported by these adolescents as study participants were not asked to report on their gender identity. In line with the Standard for Sex, Gender, Variations of Sex Characteristics and Sexual Orientation Variables released by the Australian Bureau of Statistics, future waves of LSAC will capture this information.

6 While recognising that a small proportion of children are underweight, this analysis focuses on discrimination reported by overweight or obese children.

7 Results from the analysis of racial discrimination are provided in the supplementary materials growingupinaustralia.gov.au/sites/default/files/lsac-snapshot-1-discrimination-supplementary.pdf