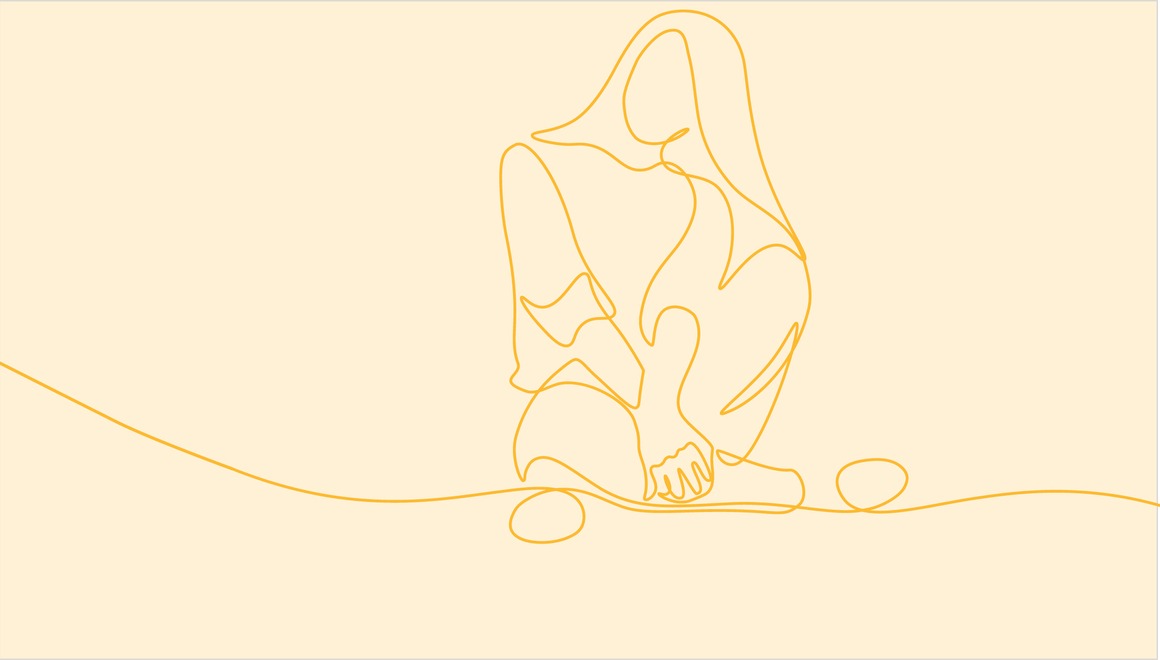 AIFS recognises that each of the numbers reported here represents an individual. AIFS acknowledges the devastating effects suicide and self-injury can have on people, their families, friends and communities.

This snapshot discusses self-injury and presents material that some people may find distressing. If you or someone you know is feeling depressed or suicidal, please contact one of the following services:

People who engage in non-suicidal self-injury deliberately hurt their bodies (e.g. by cutting or burning) as a way to manage intense emotional distress. Non-suicidal self-injury is a concern in young people as it often goes undetected. It is associated with long-term poor physical and mental health outcomes that extend into adulthood, and is also frequently linked to suicidality. Official statistics are likely to under-represent non-suicidal self-injury as they record hospitalised injuries only. Research suggests that population-level prevalence may be twice as high or higher than shown in national statistics.

Around one in three adolescents have considered self-injury

The study found that thirty percent of respondents had considered non-suicidal self-injury between the ages of 14 and 17, while 18% reported acts of self-injury.

The main outcomes of interest are the presence/absence of thoughts and acts of self-injury in the past 12 months as self-reported by LSAC study children at ages 14-15 (2014) and 16-17 (2016). 'Any self-injury' (self-injury at either time point) was used to examine factors associated with this behaviour. Factors included experiences from their early years (age 4-5, 2004), early adolescence (age 12-13, 2012), adolescence (age 14-15, 2014) and school experiences (age 14-15, 2014). Parents reported on their own and their children's wellbeing and parenting in the early years, and young people were asked about their relationships and mental wellbeing at age 14-15. School information and characteristics were taken from linked MySchool data.1

Between the ages of 14 and 17, approximately 30% adolescents had thoughts about self-injury and 18% reported an act(s) of self-injury. The proportion of both thoughts and behaviours increased from the ages 14-15 to 16-17 (Figure 1). 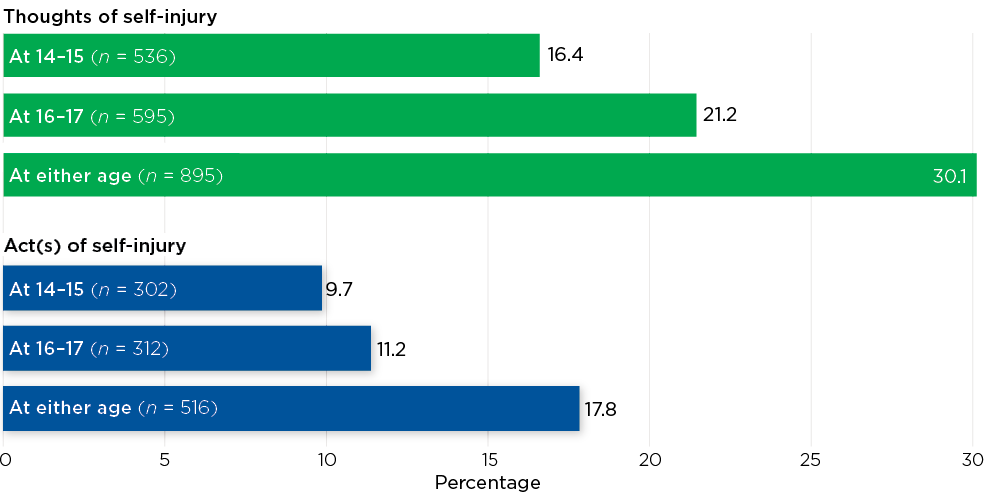 Sex and other differences 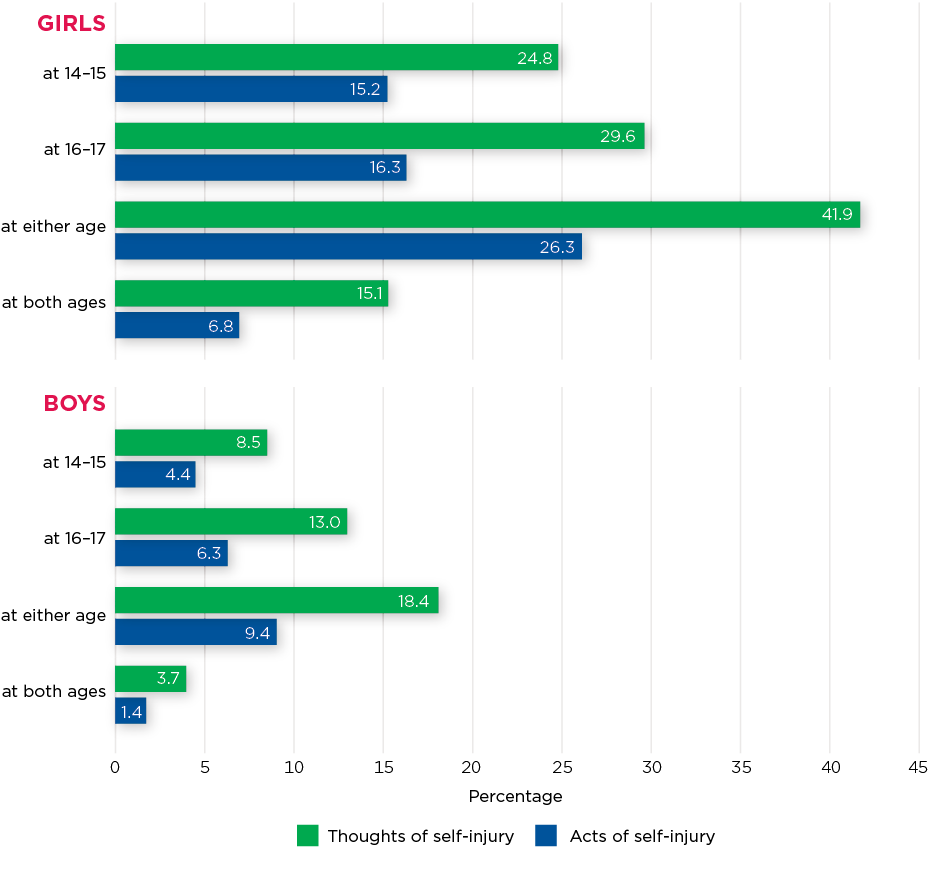 Those who were same-sex attracted at age 14-15 (lesbian, gay or bisexual) were more likely to report having self-injured at some point between the ages of 14 and 17 compared to those who were not same-sex attracted (heterosexual, unsure or no attraction: 55% vs 15%). They were also more likely to engage in repeated self-injury (22% vs 3%, respectively).3

The impact of repeated self-injury 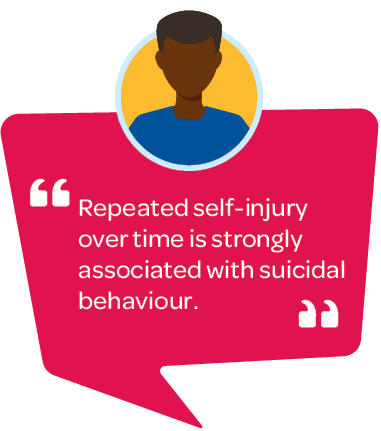 A variety of factors during the childhood years between the ages of four and 15 - some modifiable - were examined for positive and negative associations with self-injury at ages 14-17 (Figure 4).4 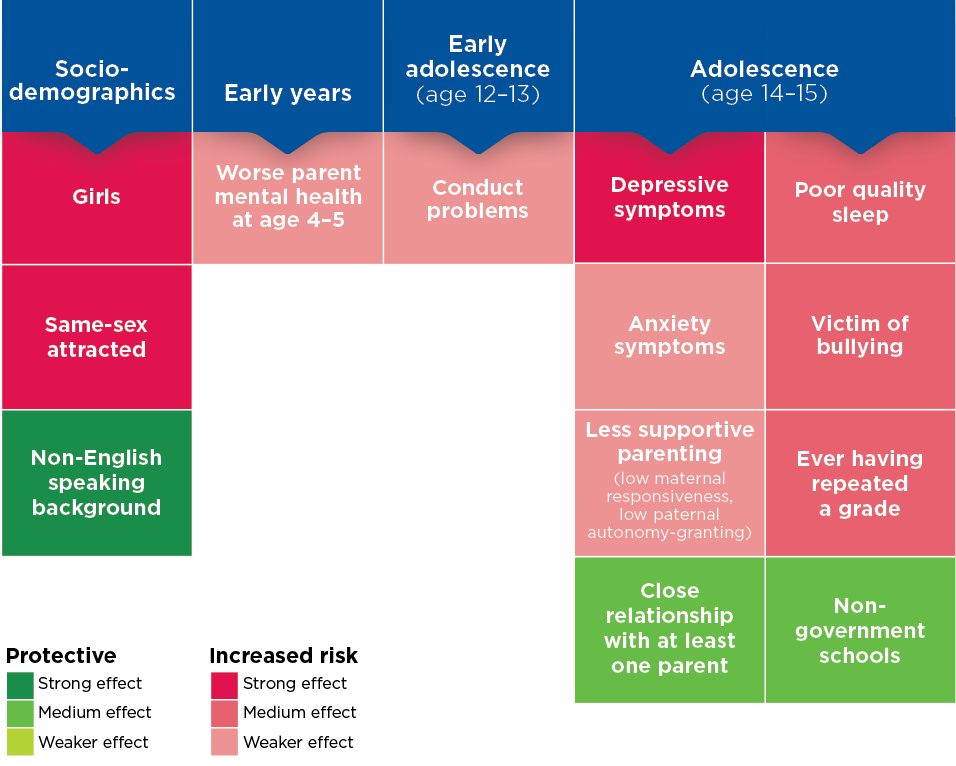 Self-injury is prevalent among adolescents between the ages of 14 and 17, especially among girls. There are several family, school and community-based preventative options to consider:

There are valuable insights that can be gained from LSAC in the future to build on this work, as more data waves become available and the cohort transitions into young adulthood. Future possibilities include:

1 Full information on the data used is available in the supplementary materials.

2 More information is available in the supplementary materials.

3 More information is available in the supplementary materials.

4 Full information on regression models is available in Table S1 in the supplementary materials.

5 More information on early life experiences and childhood trajectory modelling is available in Figure S1 in the supplementary materials.

6 The Productivity Commission's report and recommendations can be found at: www.pc.gov.au/inquiries/completed/mental-health/report